So, I enjoy travel. Trains are, of course, the very best form of transportation ever, but on a good day you can see some really really beautiful stuff out the window of an airplane. Sometimes, I will even try to snap some pictures, and sometimes, they even come out pretty well.

Cathy Davies, an artist based in Los Angeles, has similar feelings about the relaxing joy of looking out of an airplane window. So much so that she has built a screen saver to simulate the experience. Neater still, last April (when I was really down in the dumps) she contacted me for permission to use one of the pictures I had taken out of the airplane window, and posted to Flickr under a CC license.

Well, last month she wrote to announce that despite some delays induced by carpal tunnels, she was at last shipping her newest creation: Holding Pattern 2.0 . . . I have been behind on e-mail but I should get a chance to try it out myself really soon, as she offered me a complimentary copy in exchange for my picture.

If you visit her download page, you’ll see this photo I took of Mount Diablo in May, 2005. At least, I’m pretty sure that’s Mount Diablo, as seen from about Hayward . . . 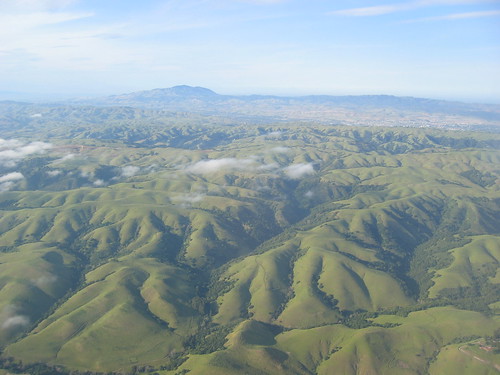 . . . Cathy told me she selected that photo because it was “one of the lushest, greenest landscapes I saw” . . . even so, it looks like she had to tweak my saturated image so users will get a better sense of the very green green that one sees in the spring-time hills of Contra Costa county. (They are yellow the rest of the year.)

It is gratifying for me and very neat to see that something pretty I caught with a camera one day be put to further creative use. There may even be a few people out there getting a bit of calm from the relaxing illusion of flight, and I like the thought of having contributed to that.