I woke up early to move the car for street cleaning, then I joined my friend for breakfast at a local favorite restaurant of hers. I had no particular agenda for sight-seeing in Long Beach, though Lorah had said nice things about the Queen Mary. It just so happened that my friend has a shop on board the Queen Mary, so we spent the morning poking around the ship, and I discovered that my old-camera-that-had-been-lent-back-to-me-after-I-lost-my-newer-camera was just about completely dead. (Oh darn.) 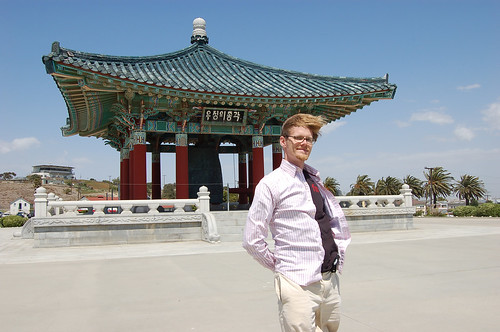 Next, we visited the Korean Friendship Bell, a bronze bell in a beautifully-painted pagoda overlooking the Pacific, which Korea gave us for the Bicentennial. There is a youth hostel next door, which I would check out next time I may decide to visit Long Beach, if I did not already have accommodation. We drove further along the coast, visiting the Wayfarer’s Chapel, which is a beautiful glass church on the coast, designed by Frank Lloyd Wright. We arrived during a wedding, as this is a very popular venue for weddings, so we couldn’t enter the chapel, and the lady at the visitor’s center advised that visits are best planned for odd hours–11am, 1pm, 3pm–since weddings are scheduled on even hours.

My original plan had been to take off in the evening and drive about four hours to Las Vegas, and crash at either of two youth hostels I had found online, or perhaps a hotel room, since accommodations are cheaper in Vegas during the week. But I changed my plans to join my friend for a late night of clubbing in Hollywood. Having no particular agenda and an evening to kill, we moseyed further along the coast, and my friend decided to give Santa Monica a shot. We found a parking spot near the beach, and noticed a movie theater. We were just in time to catch “The Namesake” which is a movie we had both wanted to see, and which we both enjoyed.

Afterwards we strolled along the beach, catching the sunset. We then embarked upon several hours of groovy carousing in the Southern California style.