We are moving! Starting in March, we’ll have nicer digs at the same price we are paying now. The move was inspired by an effort on the part of our current landlord to raise the rent, despite their stunning mediocrity. One of the few advantages the current place has is a hot tub, but as we visited it yesterday, we were soothed by the fact that the hot tub is merely a warmish tub. When we moved in last year it was hot and half the jets worked. Now it is merely warm, and only two of the jets work. And the construction noise next door is ramping up. The new place is a condo sublet, which a nice old guy wants to keep occupied by nice tenants until he is ready to sell it in a few years. Two levels, lots of closet space, a big ol’ kitchen, 1.5 baths, a fireplace!

So, yeah, we are totally looking forward to our new digs. This morning we found a “goodbye” gift in front of our door, of a half-drunken bottle of Miller Lite. Our neighbor down the hall got an even bigger surprise, as someone vomited a spaghetti dinner all over his newspaper. You’d think we were back on Walton!
Also, I am super big in Turkey! I have been getting a lot of heartfelt comments letting me know that Allah, who is great, is watching me . . . and that good Muslims will have sex with Danish cartoonists. It is all very exciting. The best part is that the Turks, in addition to leaving nice comments, also click on my ads. So, my AdSense revenue is up a good deal this month! I think that these Mohammed cartoons will eventually buy me a sandwich, so while I don’t really approve of disrespecting anyone’s religion, I gotta admit–blasphemy pays!

This might be a neat time to demonstrate the niftiness of Google Analytics. Here is a pie chart of traffic on this web site for the past week, showing us that, this week, at least, my audience in Turkey is larger than my audience in the United States: 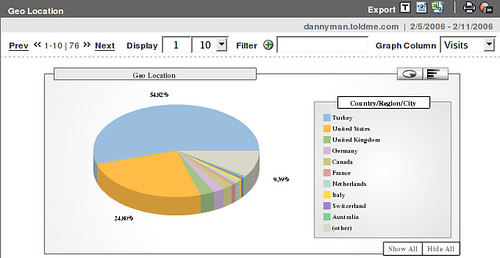 The Turks, they just love me and leave me, though. Only twenty percent ever click past the cartoons. On the other hand, someone in Iran found my web site pretty engrossing: 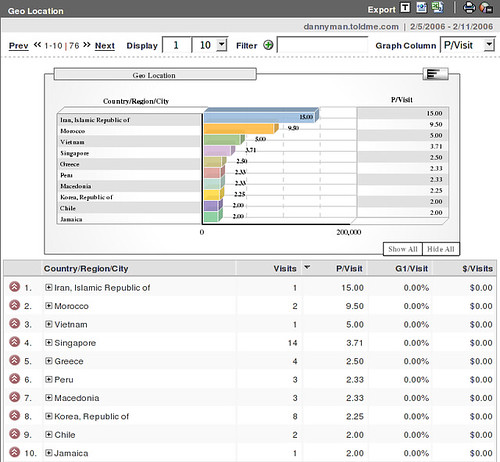 . . . must be my technical articles on Uranium enrichment.

Man, work has been busy. I had found a nice $1,500 five-day vacation in Mexico for the two of us next weekend, the only holiday until . . . May? But, well, can’t do it. Damn. I’ve also noticed that when I get home these days, I feel all the lazier. The burn out is creeping in, but at least I know it when I see it, and know to watch out. And while I feel bad about skipping Mexico, for now, well, maybe we should be packing up some next weekend anyway.