I was once asked by an Algerian, “why does George Bush hate Arab people?”

I did my best to explain . . . George Bush doesn’t hate Arab people, but after 9/11, he sees militarism as a way to gain support from the American people.

Of course, any perceived insult to Islam is a tool to control Muslim people. Muslims are now killing each other over cartoons published in a Danish newspaper. The BBC reports:

Demonstrators shouted “death to Denmark” and “death to France”. They called for the expulsion of diplomats and soldiers, who were sent by both countries as part of international efforts in the US-led “war on terror”.

“They want to know whether Muslims are extremists or not. Death to them and to their newspapers,” he said.

On NPR this morning, “Morning Edition” explained it something like this:

But . . . what really annoys me, is that Muslims will protest cartoons that, maybe they haven’t even seen–they are not even easy to find in the Western media–which is why I posted them here . . . they are doing what they are programmed, so easily manipulated to do, by their governments, and by their media. Where are the protests when their own media routinely publish cartoons of this moral caliber? 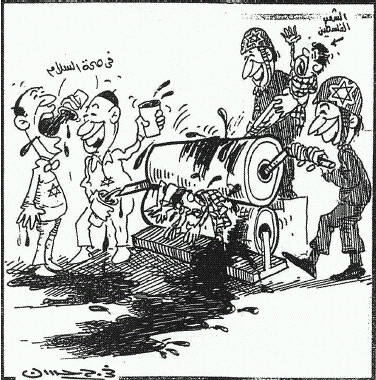 And we need to get off the oil habit. It just feeds the nonsense.

Next: My Last Word on the Cartoons
Previous: Publish Those Cartoons!
Categories: Politics, Religion