The West’s current struggle with a murderous global Sunni Muslim insurgency and the threat of a nuclear-armed theocracy in Iran makes it clear that it’s no longer possible to overlook the culture of intolerance, hatred and xenophobia that permeates the Islamic world. The hard work of rooting those things out will have to be done by honest Muslim leaders and intellectuals willing to retrace their tradition’s steps and do the intellectual heavy lifting that participation in the modern world requires. They won’t be helped, however, if Western governments continue to pander to Islamic sensitivity while looking away from violent Islamic intolerance. They won’t be helped by European diplomats and officials who continue to ignore the officially sanctioned hate regularly directed at Jews by the Mideast’s government-controlled media, while commiserating with Muslims offended by a few cartoons in the West’s free news media.

As seen on the streets of London, by virgorama, who has generously shared via the Creative Commons License: 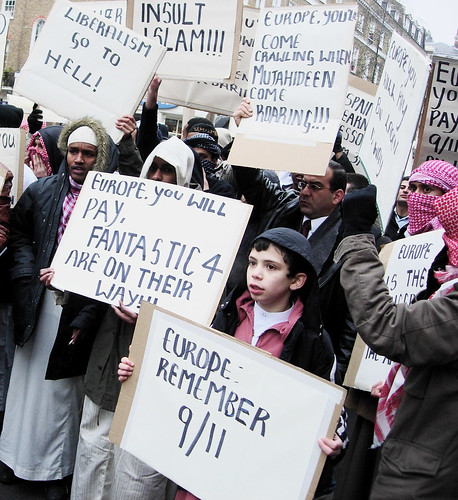 This is why those cartoons need to be published. British Muslims, calling for blood, threatening terrorism. 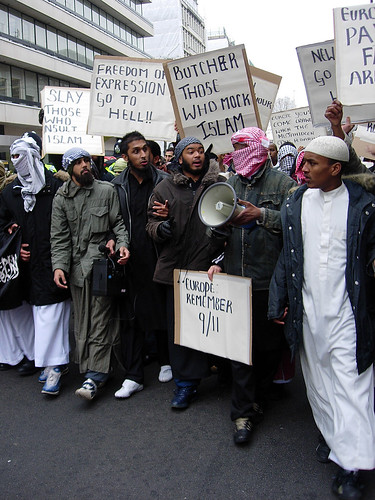 I am all for open-minded tolerance and what not, but its behavor like this that demonstrates that some people are stuck in an ideology that is not compatible with modernity.

They need to come around and learn tolerance, and if they are not capable of that, then they need a hysterical freakshow like George Bush to give them what they want they want: bloody jihad.

I vote for the learning, and the tolerance. One needs to be able to accept that a cartoon will insult your religious faith, but be secure enough in their own faith, and their own selves, to stand up and say “I hate that cartoon, but I will not be ruled by my hatred.”

As a religious minority in America, I see insults to my religion all the time. “Athiest Day April 1” is my personal favorite . . . is it that Atheism is a superior religion that I don’t go killing Christians every time I see an insulting bumper sticker, or is it that I grew up in a land where the First Commandment in the Bill of Rights is a respect for freedom of speech.

Well, and freedom of religion, even if we are still pledging to the “one nation, under God.”

The Enraged Muslims need to grow up.

NOTE: As the photographer whose work is cited above takes issue with the tone of this article, and misunderstood the implications of the photographs’ Creative Commons license, I would appreciate pointers to similarly appropriate photographs with appropriate license terms.