The past week has been good. Saturday was the excellent Birthday Party #30. Sunday I got some work done, then I was getting up to pick up Jessica at the airport when she called and reported that her Southwest flight had landed 40 minutes early! So, I met her at the BART instead. Monday and Tuesday I was out-of-sync, and Tuesday at work was spent doing some emergency resuscitation of a dead laptop . . . Wednesday morning, I think it was, I was back on my game, and on the bus ride in to work, I saw something really cool: a full traffic break.

I had been wondering why the Southbound traffic was so sluggish. Then, all of a sudden, I saw the traffic evaporate in the Northbound lanes, which were led by a Highway Patrol car, weaving to a full stop, four lanes of traffic behind him. Everybody stopped, and the officer got out in the middle of the highway, to remove some chunks of wood. A guy in a white pickup truck at the head of the third lane hopped out to help remove debris, as our Southbound traffic sped away. “Northbound 680, all lanes stopped at Danville to remove debris. Gapers Southbound,” is how that might have been reported on Chicago radio.

Gapers. Gapers is a traffic delay that you get when drivers slow down to gape at something interesting along the highway. “Something interesting” usually means a traffic accident. And in many cases, it is only reasonable to slow down, just to make sure people aren’t leaking from the incident into the traffic lanes. For my part, I thought the full traffic break, during rush hour, was a sure sign that we are civilized: we empower a single cop in a patrol car with the power of Moses, to part the rolling seas of a busy highway, to make 70MPH a dead stop. I heard an opinions piece on the radio some months back, a guy from India felt that Stop signs were emblematic of America’s true power. In India, nobody would ever stop at a stop sign, so the government doesn’t bother with traffic control. In America, people will come to a full stop nearly every time, even if they don’t really need to, because our civilization is in such a state that people respect and understand the legitimacy of our laws. 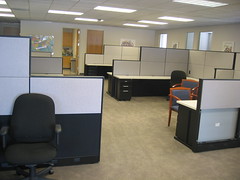 The office is filled with cubicles!

Anyhow . . . on Thursday we got our cubicles. They still need power, and network, but we have got cubicles now! With any luck, I will cling to my luxuriously large office for some time. The telecommuting types will go live in the cubicles, and they can come hang on my couch and enjoy some down-tempo techno. We also have a new industrial coffee maker, with instant hot water. Add that to the new printer, the new printer which I have a special love for, since I procured, assembled, and configured it myself, and since Linux — Linux! Linux had just the right drivers for the printer, no muss, no fuss. Windows . . . needed the CD-ROM, and Mac . . . the CD-ROM was screwy on the Mac, which works well enough when it treats our new friend as a “Generic Printer.”

No long warm-up cycle . . . you send the document, and it prints. 45 pages per minute! Man! The old printer wasn’t nearly this cool, and it has been broken for a month. The new printer . . . has a three year, next-day on-site service contract. And it sits on its own little $450 rolling cart. It has the height, mobility, and charm of a mute R2D2. I love that printer.

Anyway, yeah, the cubes are pretty sharp. Each workspace is 8’x8′, so nice and spacious, and they’re laid out bull-pen style. Two tone, grey on black. We might have gotten nicer colors but this is what the guy had pre-owned, right? But the grey on black is looking pretty sharp. By filling in the open floor area it feels like our small company is poised to grow, which it is. Electricity! And, the new printer. I love the new printer. 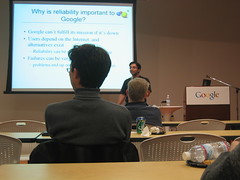 On his fifth slide, the presenter entertains question #73.

So, yes, I have been spending too much time working, if I love the new printer. Thursday evening I drove Yayoi down to the Google campus for a BayLISA presentation on Google’s High Availability architecture. We went out for Thai with Brian . . . man, it ws delicious, and then Google had a freaking luxurious spread . . . and the excitement of it’s uber-cool campus just outside, and a good presentation, or what would have been a good presentation had it not been for the 90% overhead per slide of SysAdmins asking obnoxious questions. After several hours, I bailed, we drive home. But Yayoi was thrilled because she’d spent the time studying in a conference room near Brian’s office, enjoying the Google Snacks and she got to ride a Segway across campus. Man! I wanted to dig the campus! Next time, Yayoi gets to sit in the tedium! Well, at least someone had a good time. I took some solace in triggering a bunch of “you just said what I was thinking” discussion thread on the BayLISA list the next day.

Friday, I worked late, polishing off the last documentation for a client audit of our systems this coming Tuesday. I am extremely jazzed about the awesome new network I have built for the client these past several months. And, just as I was ready to leave, our backups robot . . . finally called it quits. It has been ailing, but it picked late Friday to die completely. So, I had to spend a bit more time at the office, swapping some hardware around to implement our backup backup plan.

Yes, we have a backup backup plan. I mean, we get audited, you know. And it is my job to build our systems like the Borg, where you can blast away and bust out several parts of the system and it’ll just chuckle a bit and keep coming. That’s cool, but tonight I’m catching the red eye flight out to Northern Virginia . . . landing at 6:30AM, driving around in the rush hour at what for me will feel like 3:30AM. Man. Tomorrow’s going to suck. And then Tuesday . . . Tuesday, we will rock some socks.

But for now, there is laundry to fold and put away. Yayoi is working at the cafe . . . I have to pack and say goodbye to my woman and then drive off to Oakland for my newest East Coast expedition. But we got some sunshine today, and with any luck, we’re going to spend a few days in Mexico next month. And, well, hopefully the office will be all the more interesting when I get back there on Thursday. Though, there will be work to do. Always more work. But at least it is engaging, and something I can take pride in.

Next: Screw Off, Fanatics!
Previous: Photos Flickr 0.4
Categories: About Me, Technology