Ahhh, so in my getting to grips with, I have a few gripes about Linux. Some day I may cultivate these into a well-formed, coherent technical explanation, but just now . . . just now, I’ll share with you a special favorite rant of mine.

New install, right? By default, it wants to check the install media (who cares?) then there’s a screen that says “welcome to <version of Red Hat>” where you get the chance to say “ohhh, wrong CD …” then you move on to disk partitioning, and you have to intentionally select that yes you want to erase all data, and enter a bunch of other parameters … network … firewall, SE-Linux … altogether 10-15 minutes if you know what you are doing. Nothing onerous. Lots of “yes, a firewall, and these other things, these are all a good ideas, I’ll just mostly agree to what you suggest.” 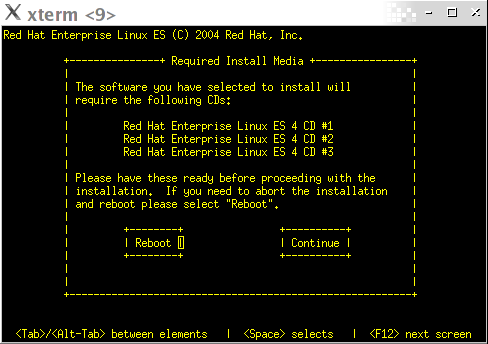 Then, the “commit” step, this stupid screen for which I have a special hatred, because to the naked eye, it appears to say: “you know you’ll need these CDs, right?” And the default response, if you are not careful, for no good reason, is to reboot!

Because . . . most people who think they want to install Red Hat are probably wrong, even if they’ve ponied up the $350 for an Enterprise license.