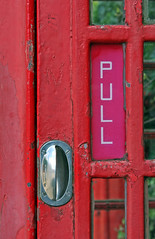 As far as I know, Tellme doesn’t have a “Tellme Labs” in the manner that Google does, though I did spend some time on my own researching the intracies of LDAP and of PXE bootstrap and OS installation.

So it was nice when I was recently clued in to Tellme Jazz. This creature doesn’t explain itself much, but I find:

Not much to it, but it is a neat combination of Internet and phone. It appears to be invite-only, a la Orkut or Friendster, so if you want to try the thing out, drop me a note with your name, e-mail, and phone number, and I’ll hook you up.

What could this become? Well, we’ve seen dozens of collaborative social-network-addressbook efforts. And while Jazz is not posing as such a thing, it could easily become one, distinguished by the fact that it can tie in phone calls as well. I like the whole idea of integrating telephones with the web, or computer-based IT in general. I mean, VOIP is one thing, but being able to pick up the nearest phone and be able to call someone (or with Jazz–everyone) without manipulating ten-digit numbers always struck me as something that would be extremely useful. It would do for the phone what Google and other portals have been doing for the web.

To that end, perhaps Tellme Jazz could be the first stepping stone to a consumer-oriented “Dialtone 2.0” idea . . . where you pick up whatever phone you own–your work phone–your mobile phone–and have instant access to a message center and an addressbook that can relay your calls to friends.

We’ll see what they do. Perhaps there will be more to tell.