I finished my state taxes today. I have about $100 coming from California. Yay. To celebrate, I went over to Za’s to spend my very last $3 on a coffee and a muffin. I asked the cashier if he thought it would come out under $3, as I had no change. He assured me it surely must, then rang up to $3.08. I was ready to downgrade my order when he did the easy thing of reaching into the tip cup and digging out eight cents. I thanked him for his generosity, and apologized that the tips were his money. He was upbeat – eight cents spread around four people! I told him that I wasn’t going to feel too bad, because normally I make a point of tipping decently, because I have worked as a waiter. That seemed to make him happier. Indeed, every time I have been at Za’s this week I’ve made sure to leave something in the cup.

I savored the French breakfast blend. It was slightly too-hot but quite soothing. Very French! And my chocolate muffin! Mmmmm!

I met Dan and Brijeet by the library at four, when Dan was picking Brijeet up from work. They are now both LIS people; Dan suspects that he has been accepted into the PhD program because even though he hasn’t received any notification, the campus phonebook server says he is in the LIS Graduate program, and if it is on the Internet, it surely must be true. 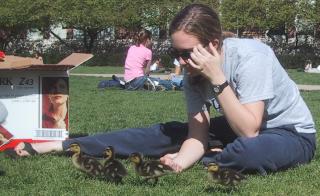 Ducklings on the Quad.

I got some quiet reading in in the afternoon sun, and when I was finished at Za’s I went and relaxed some more on the Quad, finishing another chapter. There were a couple of girls with a box of ducklings that they were adopting as temporary pets, that would be returned to the Ag school upon maturity. That was pretty neat. A little kid came to pet one of the ducks, and when his family turned to walk away the ducks made a bee-line to follow them. The girls retrieved the “attack ducks” and remarked that they were doing their duckling thing of following anything they could. Makes sense.

They are engaged to marry now, sharing a condo in Champaign that is already appreciating. It is a nice place built in the twenties that reminded me a bit of Mom’s apartment and Grandma’s old house. Very cool. What is even cooler is their kittens, who are very fuzzy, good-tempered, and playful.

We headed out for BBQ, their treat. I was most appreciative and the three of us put away a slab of pork ribs and a brisket, along with side dishes and pop. It was good eatin’. Afterward we walked over to Kopi and sipped on delicious coffee-based treats. I was most appreciative of their hospitality, but they recalled that a while back when I was in town I made the splashy gesture of treating the whole crowd to sushi. Ah! I knew there was a reason I tried to spend money on my friends when I had it that went beyond mere altruistic friendliness! The friends you treat well one day may take care of you another time. So be good to your friends, kids!

I love talking with Dan and Brijeet, coz they’re really smart folks with broad interests. Dan in particular is a kindred geek with some creative bents. Among other things, we talked about things like networking multi-dimensional finite-state automata as kinetic art, and the local business potential for wireless Internet services.

Back at the ranch, I finally made some minor technical changes to the way I’m handling HTML on the website, wrapping it in DIV elements with unique URLs based on timestamps. This will allow me to crawl through my files and compile a list of “what is new” that can be wrapped into a syndication feed. The upshot is that I want to try and be less linear, de-emphasizing the log here and surfing around to pay attention to a more thematic system of content-development. If I have an easy way to track and report “what’s new” that would provide a more immediate sense of reward.

Another benefit is that if others wish to create hyperlinks to sections within my HTML documents, I’ll have a standard “perma-link” mechanism available for them to use. Cross-referencing among “blogs” seems to be the latest fad these days, and I’ve seen some speculative buzz as to the potentially neato implications this could have for knowledge dissemination among trust networks in the digital age. Werd!