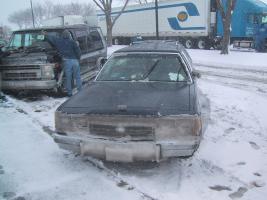 After coffee I pulled back on the road. Turns out that the headlight switch was still mucked up after all, so soon after I spent another night in the car tucked behind a tree at a Wyoming rest stop.

Next morning it was back on the road through more snow. Nebraska came and went hardly without note because my attention was on safe navigation through patches of rough weather – not as rough as the night before but definitely stuff that requires your attention. It was pretty rewarding. I dont know how many snowplow I passed with their warnings, “SNOWPLOW / FLYING SAND” mounted on the back with strobe lights flashing, and sparks flying where the plows scraped the pavement ahead of them. 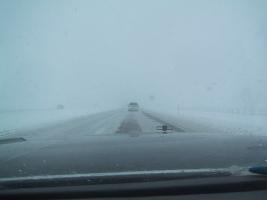 Take it slow, but not too slow. At near white-out conditions, it is good when you can track the vehicle ahead of you, and keep an eye out that whoever is coming at you from the rear also knows that you are there.

At a truck stop I heard tell of a snow plow that got rear-ended by a semi. I later passed some orange service vehicle that was laying on its side next to the road. Plenty of cars were stuck where they had wiped out, and I saw at least two truck trailers on their sides.

Iowa came without fanfare. Now it is getting dark and the rain that was the eastern part of Nebraska is turning back to snow. I can drive with headlights and flashing hazards at my rear. Maybe it is time to relax a while and see if the weather abates before considering eastward progress through the night.