Not knowing any other Americans in Bangkok, I’d done a Google search for “Thanksgiving Bangkok” and found a website devoted to Asian Nightlife with four public Thanksgiving events. I picked the 500B buffet with “Irish Food and Irish folk band ‘No Fixed Abode'” which sounded to me like the doings of an Irish pub. I rode the SkyTrain out to a gigantic world-class hotel, where I was welcomed by a guy ready to seat me at a table by myself. Perish the thought! I saw an older lady sitting alone at another table, asked if she would like some company, and sat with her instead.

She was Canadian, from Ontario. They celebrate Thanksgiving in September, and she was spending the last of her baht on a Thai meal, instead of the pricey buffet, since she was flying out early in the morning and wanted to eat something light.

She told me that she had a small farm up North, and was a member of an organization called WWOOF: Willing Workers on Organic Farms, where she’d hosted many a Japanese or Korean traveller, exchanging food and shelter for some help on the farm. What a wonderful dinner companion!

I put away three plates of food and a dessert plate — I wanted my 500B worth! After the Canadian lady left, I spent some time talking to a retired couple — he a Texan and she a Thai.

They didn’t have pumpkin pie — Thai pumpkins are different and they don’t make pie out of them. What the hotel did was adapt their monthly Irish Buffet into a Thanksgiving dinner, which is why they had an Irish band playing homage to America. I enjoyed the folk music, and the band tried to favor American composers. I stuck around until they wrapped up at 10.

Back at the SkyTrain station, I noticed that one tall girl was dressed in an unusually fancy black dress. I looked out over the streets and the skyline as I waited for the train. When it arrived, I found myself seated opposite of her, across the SkyTrain’s wide central aisle.

She was quite tall, with long fingers, light skin, and a long face. I overheard her talking with her friend, and her voice sounded unusually deep. She looked too young and pretty to have smoked enough cigarettes to explain this. I followed this hunch and studied her more. Her breasts and hips were modest, but then a lot of Thai women are unreasonably thin. Then I caught her Adam’s Apple. Having captured her secret, I loved her all the more. 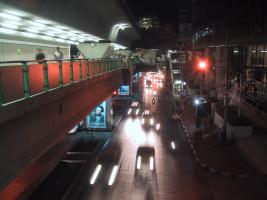 Traffic rushes down Sukhumvit Road, beneath the SkyTrain station.

I could tell she liked me too. And I wanted to make friends, but how do I go about doing this, especially if I don’t know that she speaks English? And what would she think of my potentially ignoble intentions, for though my admiration was based on the fact that I think very highly of anyone who can struggle so long and hard to to successfully capture their own self-identity, Adam’s Apple or not, she was still a damned fine lady to boot.

When I stepped off the train I looked back through the window, and saw that her head had turned to follow me. For a moment, I was tempted to return, but decided that I would leave it to fate that tonight she and I were bound our seperate ways.

On the way back to the hotel, I worked it out that Bangkok was 13 hours ahead of Chicago. I got back to the hotel at 2300 and Jessica answered the phone. It certainly was 10AM. At 50B/minute, with a 50B connection fee, the nine-minute call ran 500B, but it was worth it to hear mom’s voice on a holiday.