After waiting forever to get on the plane, at 2:40, I set my watch five hours ahead to Thailand – GMT+7. Where did the night go?

Royal Jordanian served us some chicken and rice substance, an echo of mansaf. I started watching “Road to Perdition” but like everyone else on the plane, I couldn’t stay awake. Up again at 2PM and they served us breakfast near 3. 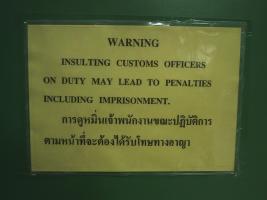 Translation: “Welcome to Thailand. If you’re going to make an ass of yourself, please wait until you’ve left the airport.”

Royal Jordanian had only given me one of the two required cards for immigration. No biggie, I had to go back to a counter to get the second form and get back in another short line. An air-conditioned bus ferried me away from the airport, and I made small-talk with an Englishman, watching Bangkok float by beneath. I’d read that instead of wearing deodorant the Thai simply shower in cold water several times a day, and among the sights from the highway, I saw some laborers hosing off behind a warehouse. The weather was muggy, almost damp, and the sky was alternately sunny and overcast. When I got off the bus at Sukhumvit Road, it was raining. Thailand is not Jordan.

A lady who got off at the same stop helped orient the Englishman and me, and I struck off for the Hotel Atlanta, which I’d selected from Lonely Planet because, while on the high end of the budget price range, it offered a coffee shop, and writing desks. It was way down the far end of its sidestreet, and had a big sign on the left of the door that read “SEX TOURISTS NOT WELCOME” as well as another sign reassuring me that if this was the place I’d been looking for, I’d found it. The cheapest rooms were taken, so I settled in to a suite for 535 baht – about $13, the price of a bed in a European hostel.

They gave me an iced tea while I checked in. A porter helped with my bags and showed the room, demonstrating how to turn on the air conditioner. Up until this point in my life I have never encountered a porter. I tipped him 5 baht: about twelve cents. Tipping isn’t customary in Thailand, but all us foreign tourists probably confuse the issue. If the tip was less than he had figured, his thanks did not betray this fact. All about face.

It being a rainy day, I didn’t feel so much like heading outside. I wandered down to read Dr. Max Henn’s guide to Thai etiquette. It offered the same advice I’d gleaned from Lonely Planet, but with the authoritative, cynical tone of a curmudgeon, who opined that before long everywhere would be just like everywhere else, and the only point to travel would be to make an ass of yourself in someone else’s front yard.

I wandered into the restaurant, where after a while I was awarded with one of the three copies of The Menu. The Menu is a thick tome, heavily foot-noted, explaining everything there is to know about Thai food, as well as the history of The Menu itself, which has historically been stolen and copied, so now each of the three available copies is different, with four more unique variations held in reserve so that as soon as someone steals one copy of The Menu to copy the Atlanta’s style, it will already have changed.

I ate two separate meals, which were cheap. The feasting was in part to make up for all the fasting during my brief exposure to Jordan’s Ramadan.

I looked through one of the English-language daily papers. In the job section I noted that age discrimination is extremely straightforward: age range is listed in the job descriptions. I can accept a lot of different cultural standards, but for me the idea that someone who is 40 is not qualified for a job simply because they’re 40 is plain wrong.

The Atlanta’s restaurant has a selection of movies they’ll pop on the tube for folks to watch. Tonight featured an old black and white where a plane is hijacked and finds itself in Shangri-la.

I thought I should check out the night-life, just to see. Ethan had recommended a nice bar where I could go to relax, untroubled by working girls eager to sell me their companionship. The first menu I saw at Q had the expensive drinks, from which I selected a “Longer Island” iced tea for around $5. After scoping the place out, I had a seat to watch the scene.

While I sat, nursing my drink, women on all sides were checking me out. I had to appreciate that this situation was reversed from the Silicon Valley: here, I was the one surrounded by ladies!

I relaxed and watched an older, chubby white guy making nice with one of the older ladies. Their pattern of interaction seemed consistent with my reckoning that she’d like to see some money for her companionship, but then what do I know? Her two girlfriends were checking me out.

To my left was a group of girls that featured an energetic, light-skinned girl with pig-tails and braces. Sixteen? Heck if I know. One of her friends was chubby and butch, a nice change of pace for Bangkok. Another friend turned my head a few times with her own commotion, and then asked me to dance.

Toffee is studying Mass Communications at Bangkok University. She’ll soon be off to Manchester, England, to hone her English. She asked if I had a girlfriend back home. We whiled the time with her friends, holding hands. We saw each other off by exchanging e-mail addresses and a good-night kiss when the bar closed at 2AM. I made it back to the hotel at 2:30, and was asleep by 3.