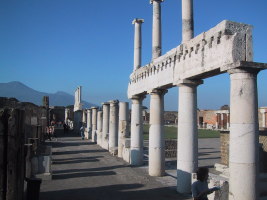 White columns stacked in front of what was once some important public building. 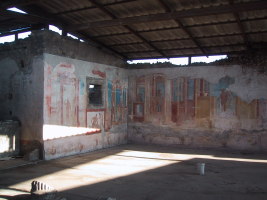 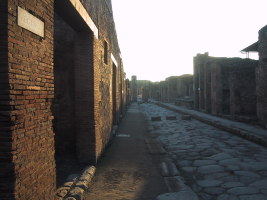 Raised sidewalks and pedestrian crosswalks. The spaces between the stones in the street are for wheeled carts.

We rode on from Rome to Naples. As you travel North to South, Italy shows you two sides of Europe. The north, Milan, is like anywhere else in Western Europe, where wealthier people shop in fancy stores. As you move South to Naples the sun gets brighter, the mountains get more barren, and the people hang brightly colored laundry on clotheslines out of their homes. Rome represents the Southernmost outpost of Western Europeanosity, beyond which, to the South, lies a land that’s still wild. Sicily is where the mobsters came from, and Janet picked our hotel because the guidebook described it as “safe and affordable.”

We visited Pompeii, which is a bit of a train ride outside the city, but worth the trip. We wandered for hours through this ancient Roman city, frozen in time by a volcano. Walking along narrow, but sturdy streets, with raised sidewalks on either side to keep the pedestrians out of the filth. Columns, mosaic floors, painted walls, restaurant ovens . . . it felt very much as if we were in some special place where ancient Roman culture was still fresh.

Walking along modern Naples’ crowded streets was challenging, as sidewalks were narrow when they existed at all, and the cobblestone streets had guys on scooters racing whichever way they wanted. Napoli is home to Italy’s best pizza, and we picked our way over to Napoli’s best pizza place. It was a pilgrimmage, for me, because Chicago has the best pizza in the world. But as I learned in Rome, Italian pizza is an entirely different food, magnificent in an entirely different way. In Naples we experienced the penultimate pizza.

The pies are thin crust, and they come in margherita and marinara – which means with cheese, namely thick slices of fresh mozerella, or without. The pies come in medium size or large and even though the menu and the food is simple, it is a wonderful, delicious, filing meal. They offered water or coke. I had two pizzas and two cokes. It is unfortunate that Chicago Pizza and Neopolitan Pizza share the same name, because they are different foods, and they are each the best of what they are.