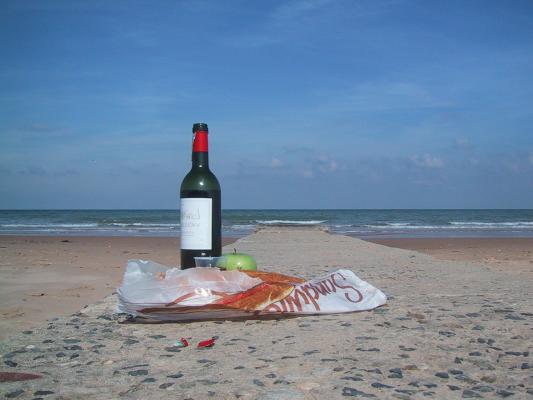 The Guided Tour via bus costs upwards of 30â‚¬. I can afford solitude.

This morning I got a nice sandwich on a baguette for 1â‚¬90, a couple of apples for .95â‚¬, a bottle of wine for less than 4â‚¬, a pocket-knife with a corkscrew for 13â‚¬, and a bike for the day for 13â‚¬. I rode off on the backroads, where bicycling is safer. The guy at the bike shop told me it was an hour or an hour thirty to Omaha Beach. It took me two hours each way, as I was lost and flabby. I was exhausted when I got to a quiet stretch of Omaha Beach, and sat down with my sandwich, which was a bit worse for wear, but still delicious. Opening the bottle, I broke the cork, but was able to fit the better half back in. I had the beach to myself to unwind from the first leg of my journey, and to think about things. 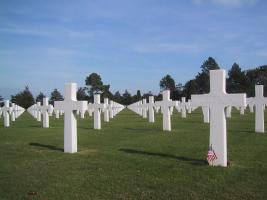 Then it was off to the American Cemetary, with over 9,000 crosses laid out in orderly rows, officers and enlisted men buried together with those Known Only to God. I spent some time walking amongst the graves. I sat down in a quiet spot in the middle, just me on the grass, in the sun, hearing birds chirping. Each of those graves was another man that would never be a grandfather to my generation. They died for the liberty of people on another continent, where they will remain forever.

They are the grandfathers of an idea. Liberty, freedom, democracy and peace are all their progeny. I am a grandchild of the world that they helped create.

It was a tough ride back. Another day in the saddle. I wasn’t sure I’d make it back before the bike shop closed at 18h30. Setting out, I felt pretty good: high on America, and what a young man might accomplish in Normandy. At the most exhausting, lonely, uphill parts I considered myself rolling along with the grandfathers, staggered along the road, gear and rifles on a road march to Bayeaux, first significant town liberated in June, 1944. Sometimes I sang cadence to myself. The country was beautiful, filled with ancient stone churches, chateaus, and cows, horses, sheep. “Bonjour, les vaches,” I must have greeted the cows one hundred times. One lowed at me.

Round Trip: About 50km

That evening I acquired a baguette and many sweets. Some Australian retirees gave me a tomato, some cheese, butter, a spare knife, and an extra corkscrew before they set off to bed. As the cork was now useless, I finished off my evil feast, and the bottle of wine, and slept from about 9PM until 8AM, breakfast the next morning.

Next: All Aboard … The Night Train!
Previous: Appreciation
Categories: Bayeaux, France, Travels