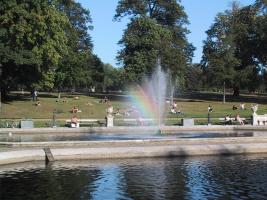 The London sunlight hits a fountain in Hyde Park, creating a rainbow.

I hiked back across the Southwark Bridge, munching on some candied, roasted peanuts, and got on the Circle line over to Hyde Park, through which I walked towards the Serpentine Gallery. Along the way, I stopped to watch a woman and her daughter feeding some soft white bread to ducks and geese, as well as the occasional pigeon willing to wade in an inch or two for wet bread. The girl was excitedly throwing large pieces by the handful, shouting weird incomprehensible gibberish, like “Maaaaaaaaahnge!” The woman asked if I’d like to feed them too. I politefully declined and quietly watched, and listened, as they fed the water fowl. I figured they must be French. “Vous etes françaises?”

She didn’t know what I was talking about, but that’s just as well, because they were Kazak. She asked if I knew where that was, “Oh yeah, the big one in the middle.”

It is just as well that I got detained watching them feeding the ducks, because the Serpentine Gallery was closed, because they were installing the new exhibit. They’d be open again next Wednesday, but I was to be in Amsterdam.