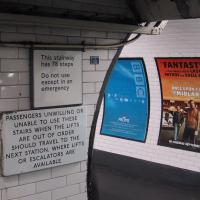 So, I figured I should check e-mail before heading home, and hopped on the Central Line towards Tottenham Court Road. Alas, there was “a person under the train” at a station up the line, so we were encouraged to take other means of getting to our destinations. Okay, let’s give the buses a shot.

I couldn’t decipher the signs at first, so I just hopped on a double-decker bus that was going down the street I’d have otherwise walked on. A wee bit down, I hopped off to try again, and started to understand that there were a handful of buses that were going to Tottenham Court Road, but not all buses stopped at all stops. It all started to come together – the tube connecting with different suburban rail services, the rail lines at Clapham Junction sitting fourteen through tracks astride, the double-decker buses skipping stops in order to serve a population of seven million, plus tourists, plus another 700,000 in the next fourteen years, and I suddenly dug that London was so insanely complex that nobody could ever hope to understand it. Somehow the British had rigged it up so that it still worked pretty darned well anyway, and I dug that that is how you get away with running an empire upon which the sun never sets.

As far as I can tell, the Greater London Public Transportation system is a wild, insane Wonder of the Human World.

I thought of the simple fact of double-decker buses that were too short for me to stand on, but which could carry, say, twice as many people in the same space. Hong Kong, built by the British, has such buses. But Hong Kong runs its crazy systems in Chinese.

And then I thought of what a mad, crazy, foreign-language treat Tokyo will be.