People-Watching Outside the British Museum

I accompanied Duncan to the train station, where I let him rush off to work, while I looked around the news stands some. On the ride in, I got off at Clapham Junction, which boasted that it was Britain’s busiest train station. I took a bunch of pictures, and a bunch more where the train lets out at Waterloo to connect with the Underground, and the Eurostar. The camera subsequently ate my pictures. 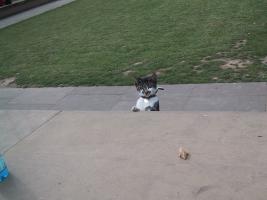 A cute kitty at the British Museum.

I spent the morning bumming around the British Museum, which has a lot of very old stuff in it, but it didn’t really grab me. Instead, I spent some time relaxing outside, where there’s good people watching. More pigeons were fed, some girls admired, I got some pictures of a cat with a collar and a missing tail, who slinked around the tourists.

I found a place across the street where I could check e-mail. This was accomplished inside of half an hour, so I frustrated myself with Canon’s web site, which will let me fill out a form explaining my problem, and then tell me that I’ll receive an e-mail telling me how to contact technical support, if necessary. The e-mail told me that it couldn’t answer my problem automatically, and that I should return to the web site to explain the problem in fewer words. This of course, could then be escalated to technical support, perhaps, which would tell me that I was probably just doing it wrong, because I didn’t explain every last thing that I had done right, because I need to explain these things in fewer words. Argh!

I shot off a note to a couple of social mailing lists in hopes that someone had the capability of getting word to a human being at Canon as to how can I get my problem fixed. I was cut off of my hour right before I could send the message, so I put up the Â£5 for five hours of access.