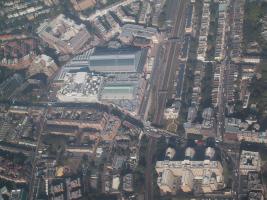 We got off the plane, onto a tarmac that was filled with random jumbles of equipment. Officials herded us on to buses, which they called trolleys, because the British call everything trolleys. Okay, drive around the airport for a while, and eventually we were off-loaded at the immigration station. Up a flight of stairs, and those of us coming from outside the EU or the British Commonwealth got to stand in our own queue for not a very long time.

The immigration officer perked up a little at my approach, complimenting my brightly-colored shirt. He asked me what was I doing, I told him I was a tourist. Did I have a ticket home? Yeah, well, eventually, from Osaka. Could he see a ticket? Well, here’s Jordan. Yeah, whatever. You got money? Yeah, like $10,000 on my ATM card. Okay, here’s your stamp.

Wary of the 1.5% commission on the currency exchanges at baggage claim, I wandered through the twisty warrens of Heathrow Airport in to another terminal, which had an ATM. I withdrew Â£50, and asked around for a phone card. Got a Â£5 card at the currency exchange. Okay, time to call Duncan. Busy. Well, how about his work number? Busy. Okay, what else can we do?

I grabbed a set of four passport photos from a vending machine for Â£3, then tried Duncan again. Busy, busy. Hrmmm, okay, well, let’s use one of these photos to secure a seven-day pass, and hop on the Underground to see what we can do from downtown.

I tried again from a pay phone across from Green Park. Busy, busy. Operator comes on and says what’s your card number? I tell her. What number are you dialing? I tell her. Doop doop, says the British ring. Duncan answers.

“Why did you go to Green Park?”

I navigated my way over to his office, where I exchanged my backpack for a bottle of some strawberry yogurt smoothy thing. Thanks, Duncan. The plan was that I should bum around London for a little while, meeting Duncan back at work about 6:30, when we’d ride back to his place. Okay.

I was operating on lack of sleep and the whole city just seemed kind of magically weird to me, so I wandered. And wandered, and I kept wandering. I found myself in Westminster Abbey standing on a slab of stone that kindly informed me that a few dozen monks who had died in the black plage were interred below. The Abbey is full of stones lain atop similarly distinguished clergy, and quite a few of the inscriptions are worn off. I kept wondering if anyone had at any point studied the rate at which slabs of the floor were allocated to the deceased, and thus developed slab allocation guidelines, as an exercise in capacity planning. This SysAdmin-ly wondering on my part bothered me more than the abundance of former humans, and I didn’t want to put up money for the proper tour, so I wandered my way out.

From there I wandered past Parliament, which also charges for admission. What kind of chintsy democracy is that? Congress has no admission fees, you just wander right in through the metal detectors and watch your government in action. I had a sit in an adjacent park, with a pleasing view across the Thames. I wandered across a bridge, hoping to find something different.

I found the Imperial War Museum, which was free, so I nipped in to get a bit of Imperial War. After getting kind of bored with that, I sat on a park bench next to a very big cannon, and shared some of my salty fried Air India snack food with some pigeons, favoring one plucky chap who was missing one foot, and was a toe short on the other.