You see, I had figured bag selection as something that I could do at my liesure in Chicago. But at the last minute I decided that in order to get my room cleaned out thoroughly I’d need three piles – things that were going with, storage, and Goodwill. Well, the best way to guage that first category is to actually pack, so I grabbed the bag. 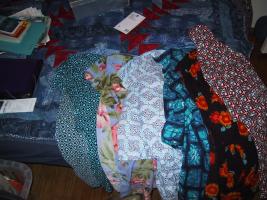 An array of colorful shirts, purchased from a closeout bin at drugstore.

Mary came by to help. This was invaluable. She fawned over the bag, which was big and functional and modest and Swiss – “You will not look so American,” she exclaimed. “With your height and blond hair, you may even pass for Swedish, or Swiss.” While I realize the advantages of not being associated with my nation’s International Buffoonery, masquerading as a not-American never struck me as important, because I remain one patriotic SOB. I took her observations as flattery, though: the harder I was for an observer to pin down, the more of a sexy International Man of Mystery I could be!

In a few hours, we transformed my room in to the three piles I have described. Mary took the monitor and several peripherals that went with the desktop I’d given her to test out earlier in the week – hers had fried and she desperately wanted a system to write with. The car was loaded with storage boxes, and the futon that Dave and Rebecca had expressed interest in. Fully laden, with the AC turned on high for a hot California afternoon, I could feel the trickier handling as I pointed the wagon’s prow toward San Jose.

Dave helped me back up his driveway and unload. Dave was half a week into being layed off. Rebecca and Mary chatted, and since it came up that their car was still broke, Dave had been working on it as I drove up, I offered them the car, over which Rebecca seemed particularly ethusiastic.