From Cheyenne to the Hills of San Pablo

Well, I couldn’t sleep. Part of it was the generator in the truck I had parked next to to avoid the flashing lights of the truck stop, and part of it was restlessness from a sound sleep from the lazy night before. Around 0200h I got out, set up the flashlight, and did a valve adjustment. She was a little warm and the valves were mostly pretty happy. Well, putting things back together the flashlight suddenly went out. Weird. Walked to the store and the bulb looked okay, bought some batteries. No go. Returned and picked out a nice-looking maglite. The lady at he counter suggested that the Coleman four-pack of flashlights was a better deal. Okay. I hadn’t been doing so hot lately so I got the four flashlights, hoping they might start breeding, maybe. 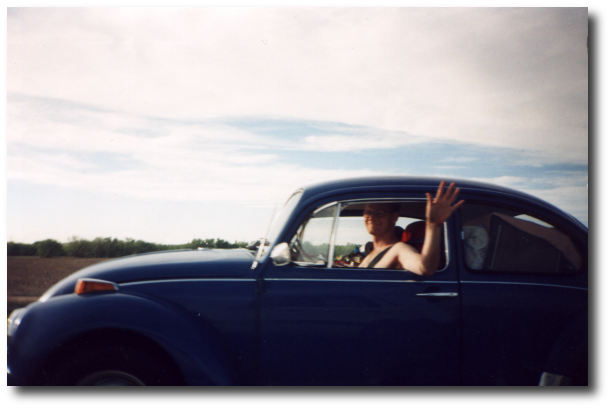 Had enough light to get the bikes back on and secured to the rack with bungee cords. And I was off.

Still, she wasn’t the happiest bug in the world, and it wasn’t the valves, and it couldn’t be the timing, I didn’t think. Could it be the altitude?

While I had time to think, slowing to 45 and shifting in to third up them mountains, crossing the Utah border, I thought about heat, and altitude, and thin air, and burning fuel, and warming up and eventually hypothesised that between the thinner air and the cold night air and the middle-grade fuel I had been treating her too, she just wasn’t firing on her cylinders with the power she wanted. Next fill up it was cheap gas, 85 octane if I remember correctly. She started perking up.

Drove through Salt Lake city about 0400h, getting a little lost because of their shutting down I-80 and having a poorly-marked detour route. The sun was coming up as I crossed the salt flats. I pulled in to one of the few fueling stations along the way, a makeshift truck stop which had a gas station, a small store, and a restaurant around back built from two trailer homes. I wanted to keep going, but my body didn’t. Two hours of sleep at the gas station, sitting upright in the driver’s seat, head leaning on a pillow.

Around 0800h and 0900h I had some eggs over easy and toast and orange juice and coffee in the restaurant. My bill came to less than five dollars. I think I left six or seven, because it was more pleasant than the overpriced meal I’d had in Cheyenne two mornings ago, and I hadn’t eaten breakfast the day before, just a cup of coffee at the truck stop.

On the road again. Wondering if that white stuff on the ground was snow or white sand or salt. Farther west, there was water, but it was still, probably because of its brackishness and probably because the desert is not a very windy place. It shined like a mirror, and was a very nice picture, reflecting the sand and the sky. Surreal. I wanted to stop and explore, but I wanted even more to finish my journey.

Stopping for gas, I encountered a large group of folks my own age travelling in a caravan of vehicles. As I added another quart and hypothesised that maybe they were a church group, one of the ladies asked had I come all the way from Illinois, and that she had a squareback that she didn’t trust very far at all.

I had indeed, I told her, breaking down only a few times, and that it was kinda boring without a radio.

That’s right, no radio. I tried to score one off of Andrew Ho, who it turns out is also coming out this way in the future, but I couldn’t get in touch with him fast enough before leaving town. Besides, the early Wagons had no radios. Heh …

I asked what her group was, and it was from some college tracking some bird … If memory serves the college was Carleton and the bird was the Peregrine Falcon, but I could just be making this up.

And on we drove, leaving Utah, spending much time in Nevada. Boring armpit of a state.

Reluctantly crouched at the starting line
Engines pumping and thumping in time
The green light flashes, the flags go up
Churning and burning they yearn for the cup
They deftly maneuver, and muscle for rank
Fuel burning fast on an empty tank
Reckless and wild, they pour through the turns
Their prowess is potent, and secretly stern
As they speed through the finish, the flags go down
The fans get up and they go out of town
The arena is empty, except for one man
Still striving and driving as fast as he can
The sun has gone down and the moon has come up
And long ago somebody left with the cup
But he’s striving and driving and hugging the turns
And thinking of someone for whom he still burns
HE’S GOING THE DISTANCE!
HE’S GOING FOR SPEED!
She’s all alone, in a time of need
Because he’s racing and chasing and plotting a course
He’s striving and driving and riding on his horse

That song was on auto-play in my head for a long time. Cake, The Distance. Good song. Ask me for the mp3 some time.

Ahhh, yes Gloria Gaynor did it well, but then again it’s Cake’s performance that just sort of haunts me.

You know, Nevada is like four hundred or so miles across. I crossed it in one blur, noting the gas getting progressively more expensive as I approached California.

Slowly did I approach Reno. And drove through Reno, and crossed the border, and was asked if I had any fresh fruit or vegetables on me. Nope, just junk food, and you know it was downhill straight through the Sierra Nevadas, or whatever the heck they are. I got 30 MPG. It seemed fitting that my mileage should increase nearly 50% upon crossing the California border.

Around Davis the odometer flipped. I managed to pull over and get pictures with the digits halfway across the line.

And as it was getting on in the evening, and it was on the way, I got off I-80 at San Pablo and tried in vain to find MikeyA’s place, maybe a suprise and a meal.

You know … there be hills in San Pablo. The biggest difference, I thought to myself, was that California has hills. And since they mark not only with traffic signs but with copious pavement markings, driving takes on a three-dimensional aspect. Nothing like pulling away from a stop sign in second gear. There were a few awful scraping sounds as Lucy’s loaded rear end found pavement to scratch against.

Anyway, I found a pay phone and Dana gave me instructions on how to find the liqour store Mikey was workin’ at that night. Found the place no problem and gave Mike a good suprise. He and Dana proved again to be gracious hosts and I communed with their couch another night.

Next: 14 June, 1999
Previous: Breakdown in Wyoming
Categories: About Me, Biography, Road Trips, USA