Wednesday before last I finished my last final, for Geology 118, at about 9AM. I walked out of Greg Hall and toward the crowd and just kept thinking to myself, “Done, Done! DONE! DONE!!” 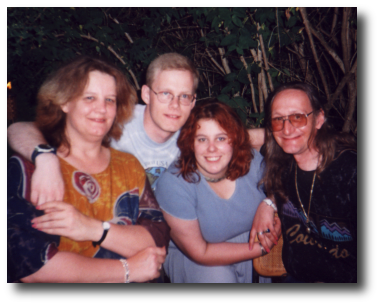 After relaxing and packing and otherwise casually enjoying myself and trying to tune the car, and visiting Chicago one last time, I woke up Saturday and remember driving over to Piccadilly and fitting two kegs of beer into the back of the Volkswagen – one Honey Brown and one Ice House. Throw in another 100 lbs of ice and you have yourself a party, if you count the propane fillup, and all the food and other stuff gathered by Scott and Chad, and the legwork done on getting the hot tub working, on the part of Scott and Oleg.

Before taking off for Piccadilly, Dad and Gwen arrived. After getting the kegs set up and Mom, Grandma, Uncle John and Jessy arrived from Chicago, we headed over to Foellinger for Humanities Convocation II. A relatively small ceremony by U of I standards, but still probably lasting at least an hour, each of us from several majors, most notably English and Rhetoric, taking our turns to strut across the stage. Everyone was in a good humor.

Upon returning home, some friends of Chad had already arrived and the grilling was beginning. Scott started out strong on the grill, making much food as he had prepared to do. As the night wore on Tunji, Goth Dan, Brijeet, Jay, Tim Skirvin and all the Allenites, ‘toly and Morris and Anne Nowinski and Rene and others showed up. Vern rode the nookie van down from Chicago and Mark Meyer and his girlfriend showed up. What started as a nice cookout got better as the hot tub opened up, and the less inhibited folks, almost exclusively my friends, tried it out. The sun went down, Beth came by, beer in a hot tub … ahhh …

… and we woke up the next morning … Adam had slept on our couch, and I believe he and Scott were hung over, the hot tub having a dehydrating affect which improves the punch of alcohol. About one in the afternoon we finally got up and going with Chad and Christina over to I think the place is Merry Anne’s. Good breakfast food. In the afternoon Beth came by and we took a walk together and bid some goodbyes. The day was good and slow and lazy, and included the Simpsons going to Japan, which I found hysterical and over the top. Plus a rerun of a good, classic X-Files.

My bike rack and other car parts arrived via UPS in a pretty timely fashion. The last bits were packed in boxes, the rear seat folded down, computers in the way back, under boxes and boxes and blankets. Bike rack and two bikes, one being Erik Gilling’s, on the back. Passenger’s seat held junk food, monitor on the front seat floor, covered by a blanket. Dad and Gwen arrived from Chicago and thus did we hit the road, eventually finding our way up to 80 West and driving on through Iowa until the wee hours when I started feeling punchy and we pulled over in a small town in Nebraska. I slept across the front seat, wrapped in a sleeping bag, legs resting out the driver’s window. Dunno if Dad got a picture of that or not.

Next: Breakdown in Wyoming
Previous: [dazed] the time is now
Categories: About Me, Biography, Road Trips, USA