I Left my Tooth in San Francisco

Saturday night we went down by San Francisco’s version of Navy Pier. Pier … 39? Anyway, all they got is a lame little carousel instead of a giant Ferris Wheel, but we had some good steaks and I saw a cute little teeshirt I just had to grab for a honey I know. 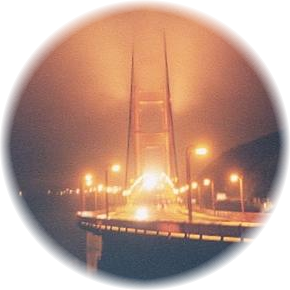 After impressing MikeyA with my ability to finish off a good meal on a full stomach … he had been concerned because I’d been taking it slow, but slow and steady and I think I finished before he did. Well, we took to ridin’ around and at an overlook just off the golden gate bridge, I did finally work loose one of my baby teeth … cuspid, I think it is. This tooth has been loose since Highschool and is all the more noticeable because of the “fang” … a canine that’s been waiting to descend into it’s place for the longest time.

Well, losing a tooth may be no big deal, but for me, it don’t happen all so often. And while I’m not one given to superstition, even this atheist tends to suspect that there may be some fate guiding his destinies. If ever there was some kind of sign, it’s losing a tooth I’ve had loose since my last big life change at the monument of the area to which I am considering my move.

At the least, it does serve as a symbol of the changes in my life. The new tooth started coming into place as I left High School, but it is not until now that the old guard has fallen away, leaving the path clear. You see in that interpretation why I can hold my own in an English course?

I had also a touch of Deja Vous. One of the few times I’ve flown on a plane was one morning as I flew from O’Hare towards Alabama when I enlisted in the Army after High School. Well, Saturday morning, I hit a sense of Deja Vous as I swear I walked past a spot I had walked that morning years ago as I boarded my flight for another destiny. This time I was walking the other way. And there wasn’t anything I really recognised … it was a section of window overlooking the runway, but I had a sudden feeling of familiarity. It was spooky cool. To interpret again, the airport represents a crossroads in one’s life, where one goes to meet their destiny. The trip to San Francisco was at a cross to the trip to Alabama. I failed in the Army, and this time I felt myself walking the other way through the cusp.

Next: Sunday
Previous: MikeyA
Categories: About Me, Biography