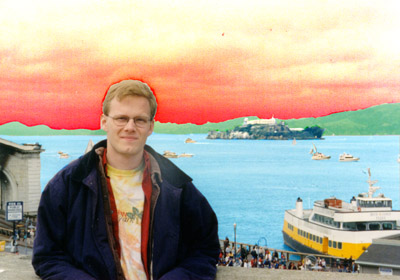 After checking out the new office space that they’ll be moving to, which is a converted warehouse that Angus seems enamoured with, and that in its present state at least, failed to really impress me worth anything, we took off toward the city, running into possibly the worst traffic jam I’ve ever seen, across a bridge that was damaged in the last big earthquake, and up to my weekend’s abode, La Casa MikeyA de San Pablo.

Now, understand that before this weekend, I had never seen nor heard from MikeyA beyond the confines of the Internet. Mikey’s been readin’ this ol’ journal here since back in 1996 when I tried to buy a modem off of him and the power brick got lost in the mail.

MikeyA actually turned out much as I had expected him to, as far as I would dare to expect anyone to turn out as anything I would imagine for them over the Internet. He’s a big bearded biker dude wearin’ the Harley teeshirt and sporting a friendly, good-natured and occasionally mischievous attitude. He and Dana and I took to each other right away. The relationship felt like the distant young relative visiting a favoured Aunt and Uncle.

Mikey and Dana showed me the sights, fed me, and were thoroughly hospitable to the point of providing the most comfortable foldout couch I can recall having had the pleasure to rest on, and clean towels, telnet, coffee and pop and of all things, a good long ride all the way back down to San Jose International.

Traditionally the company will wine and dine and provide lodging and transportation. Well, always the unconventional one, I had departed company from the business professional and entered that of the fun professional.

Next: I Left my Tooth in San Francisco
Previous: Tellme to the Bay
Categories: About Me, Sundry