I checked out of Kabul and left my luggage at Centraal, discovering the smaller lockers that ran â‚¬2.50 instead of â‚¬4. Yay. I hopped on the tram for the Rijkmuseum, but as I wandered through the galleries of art, I found that I was completely fucking exhausted, and couldn’t stand all the museum walking, and while the pictures were quite nice, compared to yesterday’s museum, I just had to go … to Haarlem!

At Haarlem station I phoned the hostel, which had a school group that day and was full. I thought I’d try my luck with the indifferent ladies at the VVV, who would be happy to book me accomodations, for a fee, give me a list of hotels, for a fee, sell me a map … well, here, look at the map / hotel guide.

I just didn’t want to. After Amsterdam the last thing that I wanted to be was a tourist. I took my notebook to the payphone across the street, and phoned the two other hostels that the friendly lady at the Haarlem hostel had given me.

The Heemskerk hostel had room. For about â‚¬2.50, the cost it would have been to book a room at Haarlem, I took the train up to Heemskerk. I’d been instructed to alight at the station before, Beverwick, but I didn’t realise this until after I had thoroughly dug the quiet, open landscape at Heemskerk station, with its beautiful clouds drifting crisply on the clear sky.

I asked a lady for advice. The trains run twice an hour. I asked her how far to walk back to Beverwick. “Thirty minutes. For a man, maybe fifteen.” I smiled and pointed at my bag, “For me, twenty.”

Maybe it was the rest on the trains, or the spirit of adventure, but the same young man who couldn’t suffer walking around the Rijkmuseum was ready to hoof it around the Dutch countryside with a heavy pack.

Actually, I wised up and phoned the hostel for the address, and found a map, and made my way there directly, instead of walking to the next town over and taking the bus that I would have taken had I gotten off there as instructed.

I had a hard time finding the place, as it was set off the road a bit, and it was a castle, which had a wedding winding down as I walked past it the first time. I was thwarted as well by the Dutch signs that warned of trespassing, and the NJHC logo of the Dutch part of Hostelling International, of a little house with a tree, that read to me as “camp site for some group that you should leave alone.”

Anyways, I found myself in the castle, with a couple of dozing, stoned Italian guys who spoke no English, and a pretty pair of Dutch-sounding girls in the next room over. I wandered in to town, explored, and had a snack at a little place that gave you a complimentary bonbon with your coffee. I also bought a couple of apples, one of which I ate for dessert, while I wandered back to the castle.

One nice thing about Heemskerk, is that I am finally some place new. I am occassionally questioned by someone, and have no idea what they’re saying, so my answer is to smile, and ask, “Spreche English?”

That evening I drifted down to the bar to work on my journal. As I was writing about the weed I’d smoked in Amsterdam, a large party consisting mainly of middle-aged Canadian women, with a few husbands thrown in for good measure, occupied the opposite end of the room. One or two apologised for being noisy during my work, but I said that it was no big deal, and anyway, my hearing was bad just then because of the ringing, so it was easier for me to ignore such distractions.

When life hands you a lemon … right?

I later discovered that they were a group of forty of a 100-women chorus from Vancouver, Sweet Adelaide. They capped the evening with a set of their four-part harmony. I found this to be extremely pleasant.

Another day in Heemskerk

I caught the hostel’s complimentary breakfast this morning: bread, cheese, lunch meat, coffee, tea, orange juice, and various accoutrements. I sat across from a Vancouver couple that had a young kid and a baby, the only members of their vast party younger than thirty. The father explained that after the chorus gig, they would rent a car and visit, among other places, Copenhagen. Sounds familiar, as I am to meet the family there on 29 September.

I was sufficiently pleased with the good night’s sleep in the cool, clean country air, and the nice breakfast spread, that I paid for another night, and an HI membership. The membership card ran â‚¬17, and immediately saved me â‚¬5 on the two nights’ lodging. The reception set to the task of scheduling me a doctor’s appointment to get my ears cleaned, which was then set at 1440h.

Which kind of killed the idea of a 7km walk to the beach. Ah well, bummed around Heemskerk’s Friday market, acquiring socks, and grazing on Dutch snacks, you know, as a cultural experience. I dropped by the Bibliotheek, which had Internet available for the modest price of â‚¬1 per hour. Unfortunately, it was not actual Internet access, but web access on a terminal so locked down that there was this scary-looking locker device in the disk drive itself. 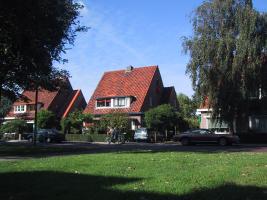 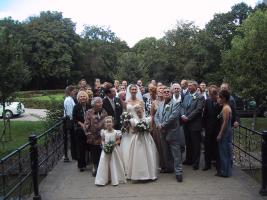 Back at the Slot Assumburg, a wedding is taking place! 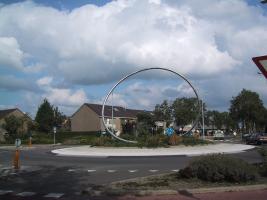 I asked whether there might be a place, somewhere, to hook up a laptop. The staff had to admit that Heemskerk was not the most Internetty place, but that there ought to be some flavor of Internet cafe in Beverwick. I attracted a minor crowd, as I left, of a few locals who had hoped to prove helpful, but to no avail. The journal, or even the secure shell client that I require merely to check my e-mail, these can wait. After all, I am on holiday.

The doctor was a very pleasant guy who cleaned my ears out with some sort of high-powered water-pick thing, then was able to see that they were infected, and write me a prescription for some ear drops. The ringing stopped on the next day.

A quartet of middle-aged women joined the Italians and me in our room, joining the Canadian chorus, although they themselves were Swiss. This was readily apparent from the Swiss flags that they posted on their beds, as the Canadians told them that they themselves would proudly be displaying their own red-on-white-banner at every possible opportunity. The Dutch-sounding girls in the next room over turned out to be Germans, and as they shared a bottle of Champagne with me their new roommate strode into the castle, a young Brazilian lady.

The German girls are in college. Stefi is studying to be a teacher, which in Germany pays pretty well, after a two-year internship. They were looking to drive on to Utrecht, where Stefi was to visit her boyfriend, whom she had met in France at this monastic retreat thing called Taize. Her companion and best friend, Maya, is big with the scouts, and is helping to staff the International Jamboree in Thailand in December.

The Brazilian lady, Nagi, was just off the plane, on a one-month vacation, which features a three-day conference on environmental engineering in Oslo. I’m joining her early tomorrow to check out the Van Gogh museum in Amsterdam.

As it is now 11PM, we suspect that the Italianos are stoned senseless in Amsterdam, and will not make it back to their gear before the midnight curfew. I myself, the Swiss ladies, and the German girls are minutes away from what we hope will be a solid night’s sleep.