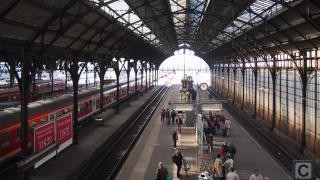 The train station in Lubeck, which is all I have seen of this town. 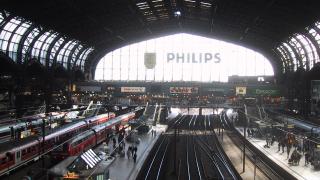 The train station in Hamburg, which looks like Lubeck, but much larger. 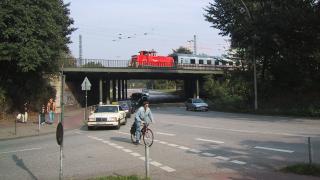 I kind of like this tableau … the little red switcher shunting DB passenger cars, the bicyclist, pedestrians and taxis. You get this odd sense of German orderliness.

Everything in Germany was closed today for the national birthday. I took the train to my previously-anticipated destination, LÃ¼beck, but just didn’t care anymore and there was nowhere to sit down and get my bearings, so I pressed on to Hamburg.

I dropped my luggage off in a locker for 1â‚¬ and went in search of hostels. I could never get an answer from the first-reccomended hostel in my guidebook, but some good soul had left a page photocopied from the Hostelling International directory for Hamburg’s HI hostel. I took the U-Bahn over. It was big and clean and overlooked the Elbe with an impressive view.

I purchased a Hamburg Card for the next day. This is a transit day pass with discounted museum admissions. It was valid from 6PM the day before, so I spent some time wandering on foot around St Pauli, a cool alternative sort of neighborhood, stopping in at little fast-food restaurants and puzzling over the incomprehensible German menus.

As an aside, I recalled Stefi’s lament about how Latins never speak English. In Hamburg I encountered any number of Germans who will continue to rattle on in German, even after they have established that I don’t speak that language. I guess that if you’re German, you really don’t notice whether Germans speak English or not, and if you look sort of generically northern European, as I do, perhaps one simply assumes that your reticence to respond is due more to your character than a linguistic deficiency. I have further found that smart-looking young adults are the best bet for English. A bit younger, the kid selling me bread was practicing her high-school English.

I stopped in an Indian fast-food place. The smells made me hungry. I ate there.

During my meanderings, I consulted various paraphenalia to determine if there was some club I’d want to visit that evening. There were a very few available on that national holiday. I opted to do laundry instead, as I was on my last pair of underwear.

The super-efficient German washer and dryer in the hostel’s basement took six hours to complete a wash-dry cycle. I and the other American doing wash may have been a clue short since the machines operated in German, but we followed the graffitti on the one machine that indicated “full wash” followed by “hard arse rinse” and “soft arse rinse”. I got to bed about 2AM. My fellow countryman remained in the basement to complete his second load. After all, he had been out the night before and just barely missed the 2AM curfew, and had to sleep on the porch until 6h30. One must respect the insanity of his long-suffering tenacity, but best to do it from a distance, tucked cozily in bed.

Breakfast was had amidst throngs of German families and school groups. I recalled the lament of an Australian I had met the previous evening in the hostel’s bar that despite the fairly nice facilities, the place was plagued by too many Germans, travelling in packs of noisy young kids, making it difficult for the solo traveler to mingle with other solo travellers, because everyone was already part of some massive German-speaking group of kids.

The Kunsthalle, “Hamburg’s one un-missable art collection” was opening when I arrived. I spent the day wandering amongst the paintings, with a lunchtime jaunt to St. Pauli area. The Hamburg Card got me around town all day for free, as well as a modest 3â‚¬ admission to the Kunsthalle, and its modern art counterpart next door.

The modern art museum was filled with a wide variety of crap. I took some solace in the fact that the crap was generally of American origin, so we’ve fooled the Germans. Suckahs!

Actually, the thing about modern art is that it doesn’t belong in museums, so much as it should appear randomly in public spaces to mess with people’s assumptions. For example, a yellow neon signs that says “five words in yellow neon” is an annoying waste of musem space, but if one were to run into it amidst the neon signery of the red-light district, it could actually transport your brain to a different place for a little while.

I saw a 45-minute film, titled “H-I-S-T-O-R-Y” which concerned itself with the relationship between authorship and death, with a series of airline hijackings framing the plot structure: a history of hijacking. The history itself was interesting, though hard to follow, because the cinematography was a frenetic pastiche of old footage from airline history, cut with random stuff like people getting married under water. It was an American film from 1999, and its tempo felt all the more excited because of the German subtitles, which threw me off from the films heavy use of English captioning.

The previous night’s wash had destroyed my hat. I’d have figured it ought to be able to weather a washing, being from the military surplus and all, but no, it lost its shape and color and it shrunk. It looked like some goofy girl’s hat. I’d have kept it around as a sick souvenier, had I the room. I made up for my hat deficiency by dropping 10â‚¬ on a haircut.

I also spent some time checking e-mail, finalizing arrangments for Janet’s 9 October arrival in Milan. I reserved a room through the Internet for us in Turin, where hotels are cheaper. Then I wondered what to do tomorrow — I was already tired of Germany — how about South France? Work my way over to Milan? How about the twelve-year-old boys in the next room over cut it out and let us get some sleep?