We bought our home in Northern California in 2012, which was great timing because that was about the last time after the mortgage crisis that we could reasonably afford a home, at a mere $605,000. At that time, the home had a floor/wall furnace from 1949 that had a hole that made it a carbon monoxide risk. We upgraded to central heating shortly after. Guys came out and ran ducts all over the attic and hooked them all up to an efficient gas furnace with an air filter. Topped it all off with a shiny Nest thermostat. It gets chilly out here on winter nights, and it used to be only a few days in the summer that anyone needed air conditioning, at which point you go to the office during the week or to the mall on the weekend.

In 2016 I added an air conditioner to the system. The local contractors seemed not quite comfortable with heat pumps, and the furnace was new, and we only run the air conditioner, well, now maybe a total of a few weeks each summer. A major construction project across the street involved asbestos mitigation, and we were having a baby, so the ability to shut the windows on bad days had some appeal. (I later gifted our old box unit AC to another expectant couple who had concerns with construction dust.)

Most of the time, we enjoy having windows open, day and night. Most of the time, our climate is blessedly mild—most of the time. The past few years have had a lot more smoke from all the fires in California. 2020 had an apocalyptic vibe when the plague was joined by a daytime sky turned orange. Shut the windows, run the AC, praise the air filter in the HVAC. For the Pandemic, I also set the air to circulate 15 minutes every hour during off-peak energy hours. (We’re on a Time-of-Use plan.) The idea is that if we had COVID-19 in our air, we would filter some of it out and help improve our odds.

This year has been less awful. The winds have been mostly blowing the fire smoke from the hellscape experienced elsewhere in the West, away from the Bay Area. As a result, AQI has stayed mostly under 200. But as I had gotten back in the habit of checking purpleair.com to figure out if the windows need shut, I got curious to better understand the air quality inside our house, so I ponied up $200 for an indoor monitor. It has a bright LED that changes color based on what it measures, and the boys think that’s a pretty great night light.

My first revelation was that indoor AQI was spiking overnight, starting around midnight. Since I first installed it near the dishwasher, I figured that was the culprit. After a week of A/B testing, I had ruled out the dishwasher and figured out when the wife goes to bed, she likes to run a humidifier, and the water droplets in the air can look like pollution to a laser. Mystery solved!

The other thing I noticed while keeping an eye on purpleair.com to see if it was time to shut the windows is that our indoor AQI would tend to have a lower (better) score than outdoor sensors nearby. That’s good news. Zooming in, I could see a jaggy pattern where the AQI would drop when the furnace fan circulated our air through the MERV 16 filter in the attic, then it would spike back up. The upshot is that we could have open windows most of the time and cleaner air inside the house, but how to run the fan on an efficient schedule?

Well, it is tied to a thermostat … I could implement an “AQI-o-stat” with a Python script that scrapes the AQI reading and tells the Nest to run the fan. The script took about 3 hours to write. 10 minutes to scrape purpleair.com, 2.5 hours to figure out Google/Nest’s authentication API, and 20 minutes to figure out how to set the Nest fan. The authentication part took only 2.5 hours because Wouter Nieworth posted a bunch of helpful screenshots on his blog. 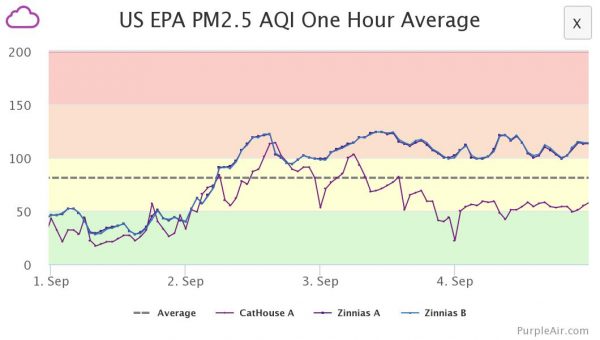 I implemented the “AQI-o-stat” on the afternoon of Sep 3, at which point CatHouse A now keeps AQI around 60 or below, while the neighboring Zinnias outdoor sensor reads in the low hundreds.

There was some tweaking, but I now have a Python script running out of cron that checks the indoor AQI, and if it is above 50, it triggers the timer on the fan. I started polling at 15-minute intervals but found 5-minute intervals made for a steadier outcome. The result is that we can leave the windows open, and the indoor air quality hovers around 60. One less thing to worry about. (There are plenty of things to worry about.) I have been thinking that, in the “New Normal” (which really means there is no “normal” because the climate systems have been thrown into turbulence) that having an air sensor as an input to your smart thermostat will probably just become a standard feature.

So, “hello” from the near future, I guess.