The president had often talked about fortifying a border wall with a water-filled trench, stocked with snakes or alligators, prompting aides to seek a cost estimate. He wanted the wall electrified, with spikes on top that could pierce human flesh. After publicly suggesting that soldiers shoot migrants if they threw rocks, the president backed off when his staff told him that was illegal. But later in a meeting, aides recalled, he suggested that they shoot migrants in the legs to slow them down. Thatâ€™s not allowed either, they told him.
—New York Times

â€œI wasnâ€™t going to ever say this in front of my family or anyone, but I donâ€™t even want you to go to jail,â€ said his brother, Brandt Jean. â€œI want the best for you.â€

When he finished, he turned to the judge: â€œI donâ€™t know if this is possible, but can I give her a hug, please?â€

When the judge agreed, Ms. Guyger stood up, walked toward Mr. Jeanâ€™s brother and threw her arms around him. As the two embraced, sobs filled the courtroom.
—New York Times

I want your best name for ADUs! Anything and everything would be appreciated!!!

A homelet is a smaller home that lives alongside your single family home. The homelet can house your family, or if you have a homelet to let, the rental income can help support your family.

Does your town have homeless? Consider building homelets!

On a chilly morning, there’s nothing quite as satisfying as a fresh omelet fried on the stove in the modest kitchen of your homelet.

Corporations bought up cheap houses during the Great recession, and rent them to families. “These large companies frequently charge higher rents and are more likely to evict tenants.”

These homes are not just properties that are rented out to house families; they have been transformed into a new class of financial asset and investment vehicle. According to the NBER study, the homes have been capitalized into single-family rental bonds, which has grown into a $15 billion-plus market.
—Richard Florida, CityLab

You can buy shares in being an oppressive landlord.

I wonder if anyone has the right soul to be a cop. It is a hard hard job and I assume every cop is going to come up short to some degree. Some cops are better and some cops are worse. I try to respect these folks doing their hard work, and I want the failing cops off the streets. 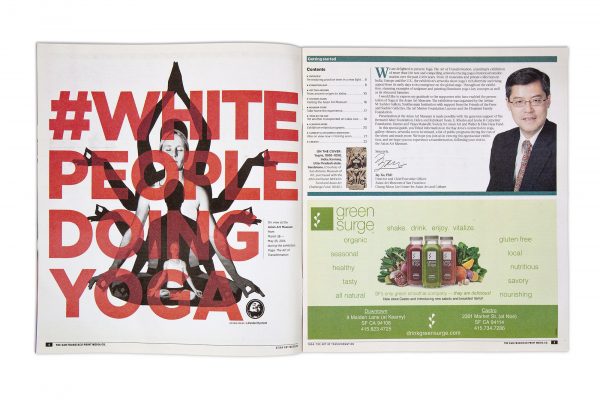 [The founder of the Asian Art Museum] was â€œthe preeminent American apologist for Nazi Germany,â€ in the words of author Jeremy Schaap.

Just a few years ago, the British Museumâ€™s Twitter account revealed as much when it shared how it decides to label artwork, tweeting: â€œWe aim to be understandable by 16 year olds. Sometimes Asian names can be confusing, so we have to be careful about using too many.â€ (Dang, sorry to all those 16-year-old Asian kids with funny names.)

At one point, a draft of the marketing material [for #WhitePeopleDoingYoga] referred to my work as an â€œamusingâ€ and â€œlightheartedâ€ collection.

One of the museumâ€™s staff members, who was white, came to my defense in that boardroom. He exposed the museumâ€™s hypocrisy by holding up its own branded tote bag that bore only the word â€œAsianâ€ on it, and as I remember it he said, â€œIâ€™m a white man walking around San Francisco with this bag that just says â€˜Asianâ€™ on it, without â€˜museum,â€™ and itâ€™s completely â€˜out of context.â€™ Why is our bag okay but Chiraagâ€™s is not?â€ The marketing chiefâ€™s response: â€œWell, thatâ€™s our brand, so itâ€™s okay.â€

After more than a month of fine-tuning our plans, the curator said there was one last â€œhurdleâ€ to clear before approval: The Cleveland museum planned to invite the cityâ€™s commercial yoga studios to teach classes and had to make sure the studios felt comfortable in the same space as an installation titled #WhitePeopleDoingYoga.

Not that anyone is going to ask me, and, why should they, anyway? But if anyone asks: white people, we have got to step it up. And sometimes that means shutting up and stepping aside.