In 2006, Sunnyvale applied for funding to add bicycle lanes on Maude Ave from Mathilda to Fair Oaks.

Maude is a two-lane road with a center turn lane. It serves as a main thoroughfare for the immediate neighborhood: residential, commercial, and Bishop Elementary. It also serves through traffic. It is very congested at peak. In the past three years there have been a few dozen accidents: mainly between vehicles, 3 involving pedestrians, 1 involving a cyclist. 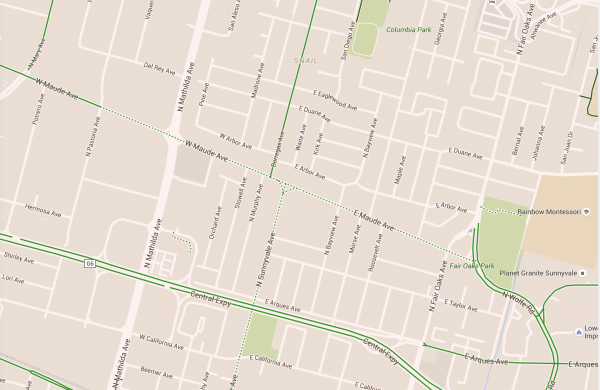 In March 2016, a community meeting was held at Bishop school. Three main alternatives were proposed:
Option 1: remove parking along Maude, replace it with 5′ bike lanes with 3′ buffers
Option 2: retain parking, remove left-turn lanes, add bicycle lanes between driving and parking lanes
Option 3: do nothing except add some signs and paint sharrows on the street

At the community meeting, many residents from the SNAIL neighborhood to the North took turns berating the city for any number of reasons. There was a lot of upset that Maude is already congested and that people might park in front of their homes. There was a “voting” board and the community poll came out something like:
Option 1: 35%
Option 2: 15%
Option 3: 50%

On April 21, 2016, the Sunnyvale Bicycle Pedestrian Advisory Committee (BPAC) reviewed the proposal. Some observations from BPAC:

Further detail desired regarding the causes of vehicle collisions along the corridor — details were not included in the present study.

Project should extend the last half block between Fair Oaks and Wolfe Road — staff remarked that this was an oversight on the original grant request, but that this could be included for future improvement projects to the bicycle infrastructure on Fair Oaks or Wolfe.

If left turn lanes are removed, drivers might use the bicycle lane to pass vehicles waiting for turn.

Maude has many driveways, and it is safer for bicyclists further from the curb, where they are more visible to drivers utilizing driveways.

Traffic impact analysis will be performed subsequent to the city selecting a preferred alternative, thus no traffic impact studies have been performed to distinguish the current proposals.

I spoke first. I live adjacent to Bishop school:
I remarked on the lack of pedestrian crosswalks, asked the City to look at adding more as part of the project.
I noted the advantages of using the parking as a buffer lane for cyclists: route bike lanes at the curb.
I thanked BPAC for noting the desirability of an extension to Wolfe.
One gentleman who used to live in the neighborhood spoke in support of bike lanes.
One gentlemen from SNAIL explained his opposition to bike lanes, due to present low bicycle traffic.
One lady from Lowlanders spoke in support of a bike lane:
Leaning toward Option 2
Asked if there had been any Spanish-language outreach, as this is the population occupying the rental housing and attending Bishop who would be most impacted by the project, especially removal of parking.

The motion passed with two dissenting votes. The chair, who lives on Murphy, stated his objections:
Removal of parking would adversely impact the neighborhood
Removal of left turn lanes would inconvenience drivers, and thereby discourage through traffic