Last week I dug through several menus to try and unsubscribe from all the spam LinkedIn sends me. Today I got another email and at the bottom was an “unsubscribe” link that I clicked on. Here’s what I got: 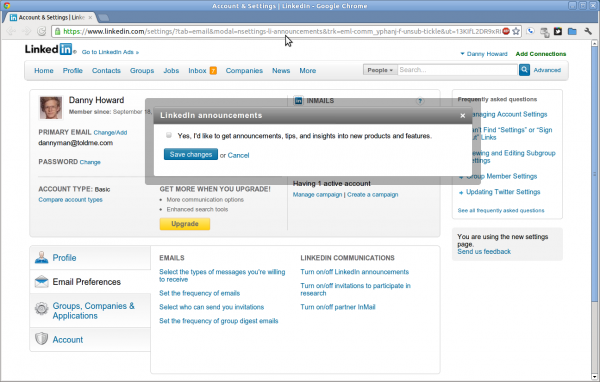 Not only is this not an unsubscribe feature, LinkedIn gets bonus points for trying to sign you up for MORE e-mail.

Instead of screwing around with the half-dozen sub-menus again, I dropped them a feedback saying that this burns up good will, damages the brand, discourages me from engaging, and may in time lead me to delete my profile. There’s more than one way to search for resumes online. 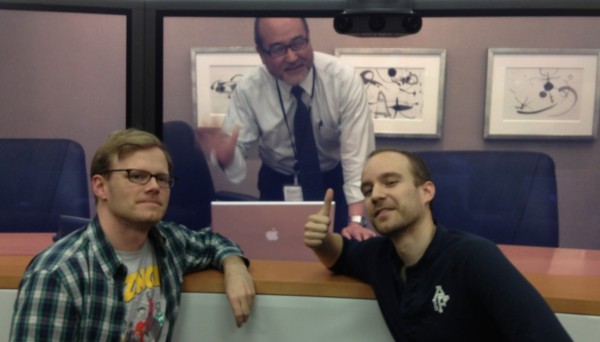 Our Frenchman flew over to San Jose from London, and wanted a picture with our American colleague in Tokyo. 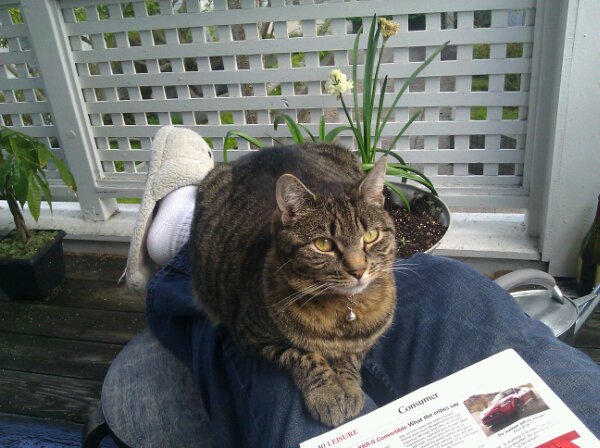 Most of the time, Maggie isn’t big on laps, but today my legs offer a warm dry spot to enjoy a sunny break from the wet weather.

Above all science was becoming religion; psychology was reducing metaphysics to experiment and a sociology of human action was planned. Fighting the vast concept of evolution, religion went into its heresy trials, its struggle with “higher criticism,” its discomfort at the “revised version” of the New Testament which was published the year I entered college. Wealth was God. Everywhere men sought wealth and especially in America there was extravagant living; everywhere the poor planned to be rich and the rich planned to be richer; everywhere wider, bigger, higher, better things were set down as inevitable.

Actually, Chapter 3 of “Dusk of Dawn” describes a transition from the world Du Bois was born into of the latter 19th century:

“(As) a young man, so far as I conceived, the foundations of present culture were laid, the way was charted, the progress toward certain great goals was undoubted and inevitable. There was room for argument concerning details and methods and possible detours in the onsweep of civilization; but the fundamental facts were clear, unquestioned and unquestionable.”

“TODAY both youth and age look upon a world whose foundations seem to be tottering. They are not sure what the morrow will bring; perhaps the complete overthrow of European civilization, of that great enveloping mass of culture into which they were born. Everything in their environment is a meet subject for criticism. They can dispassionately evaluate the past and speculate upon the future. It is a day of fundamental change.”

I feel my heart and mind whipsawing between a world culture which is on the cusp of some fundamental, unimaginable change, and a world in which we will pretty much keep doing what we have done, just bigger, bolder, better, faster, with nanites and a higher rate of return . . . I get dizzy thinking about this world I try to live in.

And Religionists and Conservatives keep shouting their objections to a changing world ever louder, ever more viciously. They’re still attacking Evolution, so the concept and theological implications of Anthropogenic Climate Disruption are even more of a leap . . .

But the today of 2012, when the big revolutions appear to be how the European Union will manage debt among member states, and whether Arab countries can successfully democratize, whether there will be regional wars on either side of Asia, and the capacity of fundamentalists to kill civilians . . . today’s world isn’t tottering as obviously as 1940’s “today.”

But it is the Big Things you don’t hear in the news every day; When will climate change trigger famine and mass migration? Will China’s rise be sustained to the point it becomes a world power or will it implode? When are we going to be hit by that asteroid that superheats the atmosphere? Just after the devastating global pandemic that trained against antibiotics and traveled everywhere on jet planes before we noticed it? Will nanofabrication make industry and perhaps agriculture obsolete? Will the Singularity bring upon us a supra-individualist world consciousness? Will medical science and DNA repeal the eternal inevitabilities of aging and death? Is that when we will feel comfortable encapsulating our bodies on centuries-long trips to distant star systems? The new Magellans will refer to centuries as we refer to decades. My thinking is so early 21st . . .

These are the things I tend to wonder about between meetings at work.