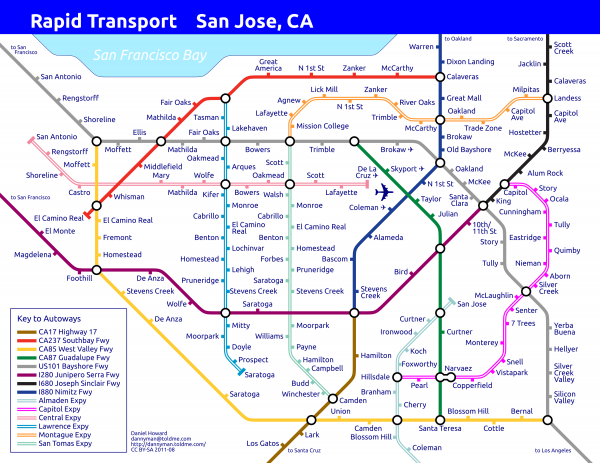 I am a fan of transit maps, but in San Jose, the light rail system is two lines and a little stub. There doesn’t seem to be much consistent bus service, either. Instead, San Jose is a city built around a set of highways. So I built this Harry Beck-style transit map of San Jose’s transportation system.

It is designed for printing on a sheet of US letter paper as a quick reference. I’m confident that a better resource would opt for a display of the major roads that comprise the irregular street grid, so you can see what flows to where, turning in upon itself and changing names along the way. I might even build a map like that, but for now, I just wanted to blow a mind or three by rendering highways as if they were a transit system in a clearly iconic fashion.

Incomplete interchanges have been omitted, and I’m sure there’s an error in there somewhere.

Update 2013-05-23: John Galantini has rendered a Tube Map using HTML and CSS, which is utterly amazing. For example, the little wheel chairs are a list of items, each representing say, the wheels, the back, the arm, all rendered using the CSS box model.

Next: No Restrooms Beyond This Point
Previous: Oh, Netflix . . .
Categories: About Me, doodles, Free Style