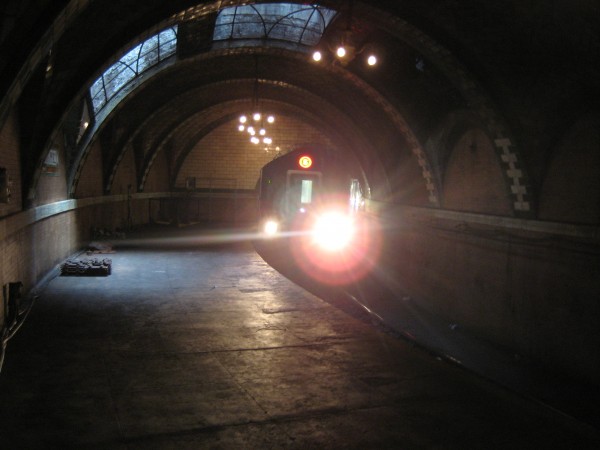 A 6 train pulls through the loop at the abandoned City Hall subway station.

Back in May I joined a New York Transit Museum tour of the abandoned City Hall station. This was the original Southern terminus of the Lexington Ave line, built on the loop underneath City Hall where trains would turn around and head back North. It was abandoned before long for several reasons, including the proximity of the Express station built at nearby Chambers St when the system was expanded, and also because when the trains moved to having middle doors, the gap on the curved platform became all the more dangerous. Lastly, it is impossible to lengthen this curving station to accommodate the longer trains run on the contemporary New York subway.

There was a plan to move the New York Transit Museum here, but folks became skittish of opening a subway museum beneath City Hall after 9/11.

You can get a quick glimpse of the station by hopping on a southbound Lexington local train at Chambers St. Our tour began at Chambers St, where we boarded the front car of a train ready to enter the loop and were dropped off by MTA staff at the station to take pictures. It was a bit dark for my camera, it is more compelling as a legend than it is in person.