I have been featured as an archetype in today’s XKCD: 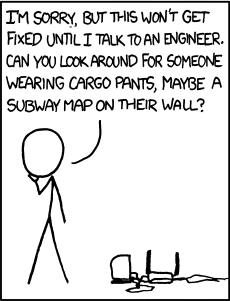 I actually hung a Manhattan bicycle map on the outside of my cubicle yesterday, while wearing cargo shorts. In a previous job I had framed poster maps of the London Tube and New York subway on my office walls. (They may even still be there . . .)

He says he has never been a fan of waiting . . . for stuff like the appeals process to go through. Our nation needs soldiers!

He was previously discharged due to his homosexuality. The “Don’t Ask Don’t Tell” policy has been repealed by a court, but the Obama administration is going to appeal the repeal. (I don’t get that.)

The military needs soldiers, and Dan Choi is a West Point graduate who speaks Arabic. If he wants to serve he should damn well be allowed to serve, and that he risks being discharged yet again if DADT gets re-instated (thanks, Obama!) is just a further testament to his bravery: he’s willing to serve despite the very real risk that he will be discharged yet again . . . dude is a hero.