You remember Ken Starr? That guy who focused the nation’s attention and energy on Bill Clinton’s penis? Yeah, whatever. 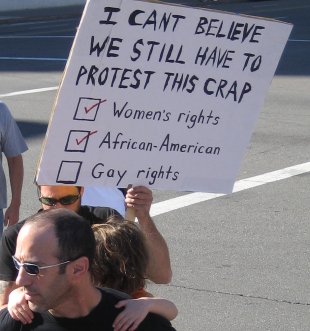 “On December 19, 2008, Ken Starr and the Prop 8 Legal Defense Fund filed legal briefs defending the constitutionality of Prop 8 and seeking to nullify the marriages of 18,000 devoted same-sex couples solemnized before Prop 8 passed.”

I have nothing nice to say. but if you hit this page and sign your name before Valentine’s Day maybe you’ll feel slightly better for a moment. Not really.

Okay, why do I care about the gays? Because I grew up as a nerdy Atheist kid. So, I grew up learning that human beings have a bad habit of shitting on the weird people. Nowadays I live in the happy wealthy bubble of the Silicon Valley, where nerds are admired and showered with wealth. And every time Barack Obama mentions “and the non-believers” I feel a twinge of optimism that we are making progress toward inclusiveness.

And I have long observed that The Gay get shat upon far far worse than Atheists or nerds have ever had it in my lifetime. All sorta of awful name-calling and we still have the occasional grotesquely cruel murder of some queer folks. You wanna get married? Hell, you just want people to stop spitting in your face? I’m 100% behind you.

So, every time I hear things are going well for the homosexuals, my heart cheers that the meek are a step closer to inheriting the Earth. And every time the Kenneth Starrs of the world make progress in the opposite direction, I take it somewhat personally. I am tired of this shit.

Next: Carbon Tax?
Previous: “æ–°å¹´å¥½!”
Categories: About Me, Featured, News and Reaction