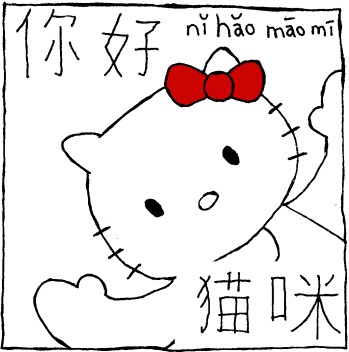 I have to give a shout out to this web site which provides both word translations and illustrated explanations of characters. è°¢è°¢! I forgot about the pinyin while drawing this with the pencil, and when I went to sneak it in the right-hand corner I did it in pen right off the bat. After scanning, I used Gimp to clean up a few lines and to re-draw the left half of the çŒ«. Funny enough, the left half of the character, which means “cat” was a bit larger and looked like it was part of kitty-chan herself. So, I re-drew it smaller in Gimp.

And I skipped the English translation since it was somewhat obvious.

Best I can tell, if you inquired about ä½ å¥½ çŒ«å’ª in China people would be puzzled, since around the world this Japanese emissary of cuteness and love is known by her English name: “Hello Kitty”.