I found this recipe on the Internet somewhere, halved it, and recently adapted it to weight measures. Makes about one dozen cinnamon rolls, and can easily be doubled. 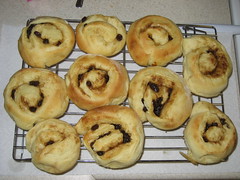 Flour work surface and hands, remove dough ball, and knead out and flatten the dough into a rectangle. (If you are doubling this recipe, flatten half the dough at a time.)

Pretend you’re making a pizza, and top the dough to taste. I use:
1/2 stick butter (slice into pats and spread like pepperonis on a pizza)
a handful or two of brown sugar
a sprinkling of cinnamon
a dash of cardamom
raisins!

Roll the prepared dough into a “jelly roll” and slice that thing into cinnamon rolls of desired size: I tend to get 12-15 pieces. Lay these out on a cookie tray, cover, and let rise for about 45 minutes.

Preheat oven to 375F. Bake cinnamon rolls 10-20 minutes. Make sure they taste good, then share them with someone you love, or someone you would like to love.

Next: Canon i250 on Ubuntu 8.04
Previous: Lady
Categories: Recipes