The Joy of Personals Ads

So, sometimes I talk to other single folk who would rather not be single and there’s whining about what a drag it is dating all these random people and how scuzzy / weird / annoying / random is online dating and how much of a pain meeting people blah blah blah. I figure if I want to be not-single then I have to learn to enjoy the art of being single. You need to have hobbies, right? So, writer-type that I am I love ever-rewriting personals ads.

This evening I was listening to a podcast on “disqualification” which is a skill you can master if you’re playing “the game” . . . no, I’m not a big player, but I like to listen to new ideas. Anyway, the point of disqualification is to take the nice things that people may say about you, and indicate that you don’t let that stuff go to your head, for one. The other bit is that if you are comfortable with your flaws-comfortable with yourself-well that self-confidence can be really sexy. And then, if you’re talking to a lady and you’re in a position where you’re counting yourself off her list, that . . . well, we all like what we can’t have, and we get that you’re not desperate for approval. Anyway, I really enjoy Dan’s blog because he shares a bunch of “charisma tips” but is also warning guys that the point is not to be the biggest player on the block, but to meet women and have fantastic, sincere relationships with them. I have a friend who seemed to fall in to that player trip, and I’ve kinda faked it myself: whatever you are doing, know why you are doing it.

So, clearly I’m rambling. Always the best time to rewrite a personals ad from scratch, “he said sarcastically.” Here’s what I just posted on Yahoo!: 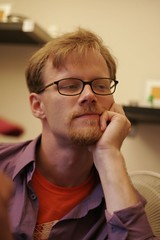 What’s this all about?

Moi? I grew up in Chicago, attending public schools. I volunteered to serve in the Army but my skinny arms can’t do enough pushups and I tend to daydream which really f_cked with the Drill Sergeant. So, I went to school instead–University of Illinois. I managed to graduate with a degree in Rhetoric and drive out here to California in a blue 1972 Super Beetle to take part in the dot-com boom.

I also did my part in the bust, waiting tables, backpacking around the world, housesitting, driving back to Illinois, working as a barista . . . that is how I met the lady who became my first wife. I was fed up with the “gay marriage will destroy America” crap that I figured marriage-who-needs-it, so when she suggested we could score her a Green Card, I was right there.

But, she grew on me, and I wore on her. Eventually she ran off with a security guard and I moved to San Francisco to focus first on my pain and woe, but then I figured out that I’m really a pretty decent guy, and I have been focusing more on career, family, hobbies . . .

I don’t watch TV. Movies, yes. Netflix . . . I spend a lot of time on the computer but I do get out to exercise (walking on the hills) and socialize, and just tending house: keeping tidy and coaxing my flowers and my moss plant to be all that they can be.

I have a thing for Asian women. That doesn’t mean you have to be Asian, but if you hate those guys don’t gaze at me unless you want to grapple with your misgivings. Really, I’m a sucker for longer, straighter, darker hair, a sparkle in the eye, and some interesting stories.

I want to meet people, get to know them, hopefully develop a mutual desire, and work from there to build a life relationship that gets us into parenthood together. If that’s your deal, let’s talk.

Thank you for reading!

We’re having a lot of fun with “disqualification” this evening, but then we all love David Sedaris. It’s all about running naked.