Until the last twenty out of a million years of human history, our “neurological disorders” were merely our personalities.

–Poe Ballantine
“Methamphetamine for Dummies”
from The Sun, July, 2007

Which only brings to mind that line from Pulp Fiction: 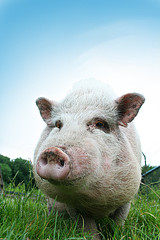 Vincent: Want some bacon?
Jules: No man, I don’t eat pork.
[ . . . ]
Vincent: Why not?
Jules: Pigs are filthy animals. I don’t eat filthy animals. . . . I ain’t eat nothin’ that ain’t got sense enough to disregard its own feces.
Vincent: How about a dog? A dog eats its own feces. . . . do you consider a dog to be a filthy animal?
Jules: I wouldn’t go so far as to call a dog filthy but they’re definitely dirty. But, a dog’s got personality. Personality goes a long way.
Vincent: Ah, so by that rationale, if a pig had a better personality, he would cease to be a filthy animal. Is that true?
Jules: Well we’d have to be talkin’ about one charmin’ motherfuckin’ pig. I mean he’d have to be ten times more charmin’ than that Arnold on Green Acres, you know what I’m sayin’?

Perhaps Jules is avoiding “mad swine” disease. Were the pigs to receive proper medication that addressed their poop-eating neurological disorders, he might find their personalities tasty delicious.