Hypothesis: Why Yawning is Contagious

It is unknown why yawning is contagious. A little while back, I had an idea: 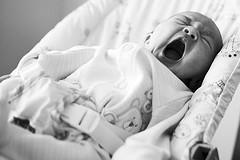 Vomiting is contagious, and with good reason. Within a household, or a tribe of homo sapiens, if someone vomits, it might be food poisoning. Since the tribe or household probably shared the same meal, then vomiting up the offending meal could save your own bipedal ass. Therefor, sympathetic vomiting confers a strong survival trait.

Well, how do you select for sympathetic vomiting? You need that behavior encoded in the DNA somewhere: a gene here, a gene there, that culminates in a behavior pattern where if you detect that someone is opening their mouth wide and involuntarily transferring a substantial volume that you feel a reflex to do the same. This encoded behavior could result in both sympathetic vomiting and contagious yawning.

Come to think of it, yawning can often be such a powerful urge that one can not resist. Sometimes, laughter, too, can be a powerful, overwhelming urge. Laughter is believed to be catching as well: a comedian is funnier when other folks are already laughing. Perhaps . . . perhaps . . . perhaps . . . all three behaviors are the happy byproduct of the survival advantage conferred by behavior that produces sympathetic vomiting.