I drove down to Mountain View yesterday and met Brian and Jessica for dinner. I also picked up the remote control for the TV Brian gifted us last year. He gave me another remote for the DVD player he also gave me last year, and then there was another TV remote that was nearly identical.

We puzzled a bit, and then I realized that this other TV remote was for a TV I bought years earlier, and had traded to Joe for the TiVo he had won. Joe had lived with Brian prior to my living with Brian, and when he moved he must have forgotten his remote.

Later that night, I was talking to Mike, who has the TiVo that I traded to Joe, which I gave to Mike when I went to travel, since Brian didn’t want it. Mike upgraded the TiVo, and has another connected to the satellite, would I like my old TiVo back, in all its upgraded glory? Not really, though I asked if he might want my car, since I never drive it any more, and could perhaps do without, but due to sentimentality, I would rather “keep it in the family.”

Anyway, at dinner Brian explained how a French technical colleague would always complain about the Academie Francaise, who were forever coming up with really annoying “correct” French substitutions for more convenient English phrases used in every other world language. (Like “bus” becomes the French equivalent of “Avenue of the Bits”. Who wants to say that when you could say “bus”?)

Anyway, I remember talking with Brian or someone how it would be nice to control the Macintosh that is connected to my living room TV from the desktop computer in the bedroom. “Well, there’s Apple Remote Desktop.” Assuming that was a Mac thing I mused “well, I guess I could use VNC.”

Anyway, I just discovered that, where the rest of the world, Windows and Linux and the rest, use a technology called VNC, Apple uses VNC too! It’s built right in to OSX! But, on Macintosh, VNC is called “Apple Remote Desktop.”

So, I hooked that up, and was infinitely pleased because I had never seen the PIXELS on my Mac before, because it’s hooked up to the TV, which is a fuzzy display device indeed. Behold! 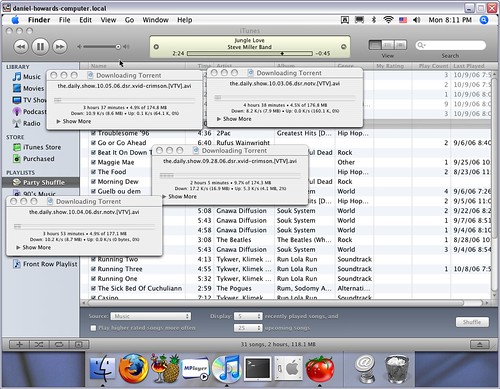 Anyway, after playing with this a bit, I mused “Apple is like France. Where the rest of us call it VNC, they must speak of ‘Apple Remote Desktop.'” Does anyone know the emoticon for chuckling condescendingly, a la mode franÃ§aise, from the bottom of one’s throat?