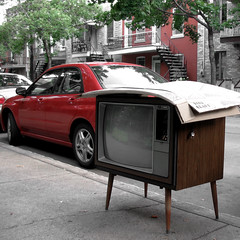 Television kicked to the curb, by cropitornot.

I have not had a consistent supply of Television since I left home for college . . . ten years ago. And lately I have been thinking that while it was a lonely time, 1996-2002 or so was also something of a “Golden Age” for me, at least in terms of learning stuff, because I ran only FreeBSD on my computers and could only play very few games. (That’s a seperate reflection for another time, and may just be reactionary nostalgia.)

Anyway, I’ve been thinking lately that watching good shows, especially without commercials, is nice stuff. TiVo is bigger than just a “smart VCR” . . . before TiVo I used to worry about whether I could catch a show at a certain time . . . after TiVo, I couldn’t care less when a show aired, if I wanted to watch it, it would be there, a few days later, and when I wanted to unwind, I could fire up the show.

I have been thinking . . . we need to do away with unmetered TV. You pay a bunch of money for cable, you feel you should watch it, so maybe you do, and your mind fills with hyperkinetic junk images and you start thinking about microwave popcorn and before you know it you are a fattened idiot voting for George Bush. I look forward to the day when shows come over the Internet, hopefully not encumbered with a bunch of DRM crap so you can watch it with your favorite interface . . . you pay, maybe $2/hour, or $1 for a half-hour show. You can of course download previews of shows for free, and you could probably sign up to watch the entire story arc of a serial at a discount, if you subscribe early in the series.

I haven’t gotten cable yet. Yayoi keeps talking about it, but she hasn’t done it. We get our shows from Netflix and watch a few episodes a week, and if we want to watch something newer, anything sufficiently popular is on BitTorrent. I tried pirating a movie or three but going-to-the-movies, hoewever overpriced, is kind of a nice going out event, and it doesn’t feel quite right to watch a new release at home.

Well, anyway, I just got to blogging because I skimmed through Kill the Television, Keep the Shows and I thoroughly agree. And it is a conversation that needs to be had. And since I’m a weirdo who doesn’t watch traditional “TV” I figure I have some obligation to bring it up.

I’d only say that having the tube going in the living room isn’t so bad. One person can watch their favorite show, and if you have the attentive capability of my mother or I, the other person can quilt or play a computer game on the laptop, catching snippets of a plot they might not otherwise bother with in the background. I listened to the better part of an episode of “The Apprentice” while laying waste to Mongolia last night. I have no idea what the characters look like, but there was enough interesting about the show that Yayoi and I had something to discuss afterwards. Then I conquered the world on my laptop.

I’d say the trick might be to have an easy chair that doesn’t point directly at the TV, and let the passive observer get wrapped up in their own little project.

Next: SysAdmin Brain
Previous: You Might Think I am Lame . . .
Categories: Good Reads, Technology