Man, it is one thing when the media flame the powers that be, but I think it is a bit more tasty when people flame those of us who may well be reading. My first taste is from David Denby, in the September 26 New Yorker magazine:

Movie taste has turned very square in this country, and I don’t know if audiences are prepared to accept a shitheel as a hero. “Lord of War” tells you why intelligent people may enjoy doing evil things, and it lets you in on the fun. It has been made without hypocrisy . . .

My, such potty-mouthed writing in The New Yorker! But for the proper lashing we turn to a local independent, The Wave magazine, which feature’s Seanbaby’s “The Final Last Word” in the September 21 issue: 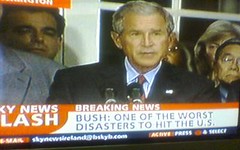 Bush damaged democracy more than all the communists in history when he proved that if you cheat your idiot ass into office the first time, there are still enough hillbillies out there to re-elect you if you tell them you hate gay people. He’s a shaved monkey raised by savage overlords who can make almost-human sounds when his trainers clap. And yet, despite all this, here we are, disappointed in how he’s handling things. How about the next time this guy screws up, we reduce all of the media coverage to the word, “Duh.”

Which, I think is actually constructive feedback for me, because my usual reaction to news of the latest outrage perpetrated by the Administration is some sort of exasperated “so what else is new?” Or, a snide, “so tell me something I didn’t know . . .” “Duh” is far more succinct.