Yiling wanted to go to Barcelona. I figured I might as well join her: I haven’t been to Spain yet, and one of my original reasons for this trip was that I could practice some Spanish. We waited in line at Part Dieux to discover that all the trains to Barcelona were full, unless we wanted to do something like 9PM-3AM. We decided to take a slow train to Avignon instead. This had been my default “next hop” anyway, and Yiling had wanted to check it out as well, but had been inclined to skip it, given her time constraints. 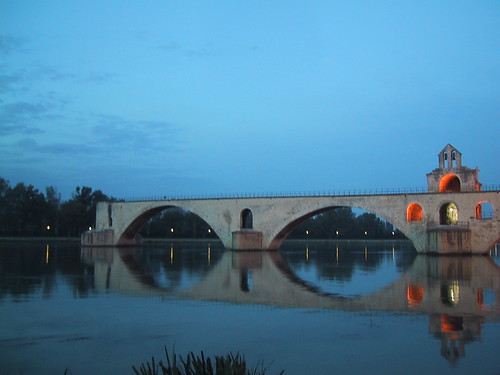 Upon arrival in Avignon, we were told that there was a train to Barcelona leaving at 3PM, and it had room. I shared with Yiling that I felt very upset about having spent the â‚¬25 to get to Avignon to discover this when I should have been told at Lyon so I that I could have used a travel day. Since we were in Avignon, we decided to give the place a day, and we reserved spots on the Thursday train.

We took a bus over to the hostel, which was closed until 1700, but the folks who were scraping paint off the walls were happy to let us stow our packs in their laundry room.

Avignon is cool because they’ve kept their old wall pretty much intact, so that it looks like something from a fairy tale. Avignon is crappy because because the drivers will yield to pedestrians only with great reluctance, and the path between the hostel and the old city requires us to cross this bridge that is at best ugly and noisy, and at worst a dangerous exercise in hurdling ditches and climbing over barriers, and then dodging traffic.

The big palace of the popes, from what we could tell, featured a tour through some really big, empty rooms, that was more expensive than it was interesting, so we gave it a pass. More interesting was the cute little bridge that made it halfway across the river, that had been completely rebuilt once and then repaired several times after flood damage before they just gave up on it and let it become the cute tourist attraction that it is today. Yiling seemed quietly intent on not spending the â‚¬3 to visit it, and I quietly wondered that if it cost â‚¬3 for us to walk on a bridge that doesn’t cross the river, they ought to charge at least twice that to all the cars that were successfully crossing the river on the other bridge.

We had a meal, which took some exploring because the town was mostly closed for Halloween. We took a quiet, dusky stroll back along the river bank and across the bridge to the hostel, which cost us each a humble â‚¬10,50 for the night, and which offers no security whatsoever, to the point that neither our rooms nor the hostel itself lock anyone out at night. This made a little sense when I considered that the hostel is part of a campground. I padlocked the laptop bag to my bunk, and kept it under my pillow for the night.

Next: Microserf
Previous: Another Day in the World
Categories: France, Travels