We made our way through the rain to Turin’s station. We split up to wait in seperate lines for train tickets. A guy in a closed ticket window beckoned Janet over, and got us two second-class tickets on the next Eurostar. It was a confusing enough transaction, where the price kept changing, and in the end we had three tickets – one for the two of us to Milan, one from there to Firenze, which is what the Italianos call Florence, and a third one which was the supplement we paid for Eurostar Italia. We made the train – despite my dyslexic tendancies to think we were bound for Venicia – and things were pretty zippy. We figured out the three tickets, and decided that while Eurostar is nice, we’d prefer to ride the slower trains that don’t cost extra. 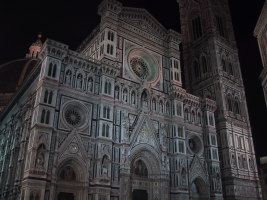 A night shot of the Duomo. An impressive monument.

Two of the hotels reccomended by Lonely Planet were in a three-story building that housed six seperate one-star hotels. We booked a room in the first one that we could find a person manning the reception, paying 62â‚¬, saving ourselves 10â‚¬ by not splurging for a private bath. The room felt like one in a hostel with four single beds, and a long list of rules posted on the wall explaining that we were not allowed to invite our friends over to drink alcohol. I clarified that the room was indeed private, and we pushed two of the beds together.

We spent the rest of the afternoon getting lost in the markets, checking out restaurants, grazing on snacks, and scoping out Internet access for the laptop. We found a suitable replacement for my hat, this time in grey, for 10â‚¬. That evening we had pasta and wine at a covered outdoor table at a nice little restaurant where the waiter gave us a discount for paying with cash.