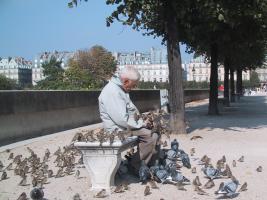 When I can think of nothing else to do,
I will be that old man,
only I will set my hat out,
So that amused tourists can
donate a bit for bird food.

After the Orsay, I wandered towards a bridge over the Seine, where I saw sunlight to warm me on a cool day. From there, I was heading back towards the Louvre, near which I saw an old guy sitting on a bench, surrounded by birds. The chickadees sat in neat little rows on either side of him, waiting their turn to join the party in his cupped hands, where he had bread. Occasionally he would toss a handful to either side of the bench to appease his avian congregants. At his feet, pigeons scrounged for leftovers, and tourists like me took pictures.

I sat a little while and admired the scene. A lady approached and lamented that it was a pity that she had no camera, for this was worth photography! I explained that I’d already snapped several pictures. Being, as she was, an Argentine, our conversation took place in a mixture of French, Spanish, and English. She explained that since the devaluation, Argentina was a splendidly inexpensive tourist destination, and that it should be my next place for vacation, where I could also find work in computers, or teaching English. We exchanged contact information, so I could share my bird man pictures with her, or find help exploring Argentina.

Since the Orsay took so much time, it was now afternoon. All things considered, I was sufficiently satisfied with MIJE, who locked our luggage away by keeping the rooms closed all day, that I decided to add a day to my stay in Paris. I decided on a liesurely stroll back towards the hostel, where I could then proceed to while away many hours in transcribing the past weeks’ journal entries into a digital format, and thence upload them at the nice little Internet place nearby.

I stumbled in to this gargantuan shopping complex, which seems to stretch underground forever, broken up by fountains and arching white support beams that hold glass for the sun to shine through. I bought a tart, and a â‚¬15 bath towel as I’d left my other towel at the Fouconnier. I sat down in a sunny spot, next to a Chinese university student who is apparently on exchange. We exchanged a few words in our common foreign language, which she was studying, as I ate my tart, and wrote more in the paper journal.

I got back to MIJE, pulled out the laptop, and began transcribing the paper journal. Time-consuming. I got a few entries down, leaving the electronic version five days behind the paper, and went and sat in a smoky French bar, surrounded by Backgammon players. I downed an expensive â‚¬5 ham and cheese (jambon et fromage) baguette, and spent another â‚¬9 for some time hitting the Internet from the comfort of my very own workstation with its sober, American keyboard.

Tomorrow, the Science and Industry museum, perhaps the Belgian gardens, and maybe some more Information Technology work, off to Normandy on Thurday.

On my way to bed, I had a conversation, in Spanish, with a young Japanese girl, Naomi, who is studying Spanish in Spain. Crazy crazy girl, crazy crazy fun. Dig!