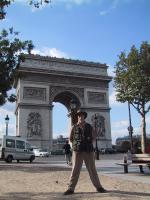 I saw the Arc du Triomphe in the distance, and got it in my mind that I ought to ask around for a library, as this might be the source of cheap, useful computing resources. That wasn’t easy, given my communicative abilities in a tourist zone. I was instead accosted by a short Korean schoolteacher who wanted a touring companion.

We wandered up the Seine to the Champs ElysÃ©e, taking pictures of the Arc du Triomphe, while I learned to slow my speech to help us converse in our limited English.

We shared dinner near my hostel. I splurged on what in the end was pretty much an all-meat affair. I supposed that I could use the protein. Kyeong Hae gave me much of her meat, some of her frites, and disposed of the other half of her lunch’s chocolate chip cookie in my gullet. We arranged to meet the next morning at MusÃ©e D’Orsay.

Nearly adjacent to the hostel was a bar that had a bunch of computers in the back. Real computers, not kiosks, which apparently were sometimes used for gaming, and were sufficient to get me on the Internet with SSH. The posted rate was â‚¬5 per hour, but there was no formal timing. I dropped â‚¬4 on my way out, after wresting a few e-mails from the bizarro French keyboard, and the guy said that yes, I could bring my laptop in.

The MIJE was something of a dive: no security and eight of us to a room. The bathroom facilities seemed adequate, and I saw them mopping the floor. I liked it, though, because it is in an unassuming French neighborhood, pretty quiet despite the 2AM curfew. The canteen downstairs has all the quiet informality of a dorm, with young Japanese chatting on and on. D’Artagnan had felt more like a bad frat party.