The Shy Japanese Girl, the Pushy Italian Man, and the Nosey American

After a baguette, on the advice of my guidebook, I wandered to the National Gallery. Oh la la! I totally dug an older, but brilliantly-colored nativity scene, and wandered my way through the galleries, out into Trafalgar Square, which has nice fountains, and tourist crowds. I then wandered … that way, and as I turned a corner I saw a tall, skinny, orange-haired Asian dude whom I heard call out “Leave me alone!”

The lilt of that phrase left me to conclude that the tall, skinny orange-haired Asian dude, was actually a tall, thin, orange-haired Japanese Woman being tailed by an Italian Man. Well, that was my assessment, at least. He sort of wandered off, then she turned a corner, sat down on the ground, and he slowly approached her and sat down next to her. After a bit, she got up and sat twenty feet further on, and after a bit, he followed her. She looked depressed, like she was supposed to be touristing, but she was instead dragging a sick puppy around wherever she went. Augh!

Of course, it was entirely possible that the two were actually in a relaionship, so I wasn’t sure if I, the Nosey American, should get involved. “Excuse me, Ma’am, is this guy bothering you?”

The pushy American was ready for adventure, but reluctant to act unilaterally. I spied a family of middle-aged, well-dressed, dark-skinned blacks, that had two stocky gentlemen in their party. I asked the one’s assessment of the situation, suggesting that if a few of us went over there, the Pushy Italian would easily feel intimidated, and bugger off. He was an Englishman who was inclined to think that a woman in that situation would likely know the proper way to handle such a situation, and that the simplest explanation was that they were involved, but who knows? He was inclined to let them be.

Failing to enlist the support of my British Ally, I resolved that I’d keep an eye on them for a little while, and found a seat across the square to review my guide book. She sat with her head in her arms, as he patiently waited for further interaction, occasionally trying to take her hand, or touch her leg.

I’d read about Pushy Italian Men in the guidebooks, and how to handle them. I figured he may well be tailing naive, Shy Japanese Girls, and that if she was a Shy Japanese Girl, inclined not to make a fuss, or draw attention to herself, or be assertive, and all of that horribly sexist stuff that I have learned that Shy Japanese Girls are taught to abide by, then, well, they were at an impasse.

How to intervene? I thought of different scenarios. First was “Ah … don’t I know you? Yoriko-san! It’s been a long time! Say how’s your boyfriend, Ben, I haven’t heard from him in a while?”

That was too presumptious, I thought, and if I did have the right idea, the subterfuge may blow her mind even more. “Oh, great, yet another man, what now?” Duncan later allowed that if they were a legitimate couple, then implying that she had another boyfriend could very well break the camel’s back, and definately turn things ugly.

What about asking for directions? Nah. Maybe I’d be able to slip her a note and inquire if she was okay? That requires English, on her part, and she’s stressed out. Just walk up, all friendly, and note her discomfort, and simply ask is she doing okay? An invitation to confess that, well, actually, this guy is bothering her. Find another Japanese group and ask them to drop by and talk to her? “Hey, we’ve been looking for you,” and then get the scoop in Japanese, wandering off, if necessary, with their group.

Finally, I decided that the best bet was to lure him away. “Excuse me sir, could you come over this way a bit, to take a picture of me by this cannon, with your back to this young lady, who would now have the opportunity to slip off, if that is her desire?” 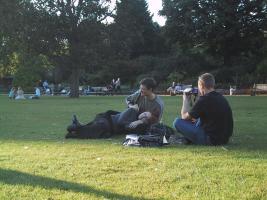 In the end, though, I simply doffed my cap at her a few times while she was looking my way, and he was not. Just a quiet sign that the guy at the far end of the square had his eye on the situation. In the end, she got up, they spoke, she wandered one way, he started to follow, she’d sit down, then she’d head the other way, ’til he followed, then she’d stop. They zig-zagged like this a couple of times until they exchanged a few more words, and she headed off in my direction, as he watched. She was coming directly towards me, maybe I’d been an excuse on her part, or an intimidating destination on his. Two-thirds of the way towards me, she banked, and headed through the tunnel to her Majesty’s gate, or whatever that was on the other side. I was more gratified that the situation had been resolved than disappointed that I didn’t get to speak with her, to find out if my assessment had been accurate. After a moment or two, the Pushy Italian still standing on the far side of the square, I followed through the tunnel. This might mark her as mine, in his eyes. I didn’t spot her on the far street. I hung out a little while, then headed back through the gate towards the park that I had previously been interested in getting to, passing, on my way, the Pushy Italian. We looked at each other for just a moment, as we were passing. I had anticipated antipathy, on his part, but saw only idle curiosity.

I took a picture of a group of German tourists, lounging contentedly in the park. I felt, once again, at home in my traditional tourist role.