So, this week Jesse was in town, as part of his grand whirlwind tour of his civilian friends from across our great nation. This morning I dropped him off to the Airport, and North he rode to Portland, I think. Ultimately, he’ll be back on Okinawa. Back to the Marines for the balance of his enlistment.

But it was nice to see an old friend.

This week we went to the LinuxWorld Expo in San Jose. We attended the “Get Sloshed with Slashdot” party – free beer, and last night we went to a VA Research party, where you had to pay for your alcohol.

At one point, I was standing behind Eric Raymond, which was cool enough in itself, and noted he was talking to some guy about a message they’d exchanged the other day. The guy turned to leave, and I caught his profile and a little penguin icon popped up in my brain and I asked myself, “Is that Linus Torvalds?”

It was Linus Torvalds. I talked with Jesse and Dave and they’d both had similar experiences as I had of seeing this dude and realizing that it was Linus – this hero of computer geeks ’round the world. Not like we all think Linus is a God, but it felt like I’d been hanging out in the Silicon Valley, and here I am at this party and I see this guy who’s a great big celebrity, and I likened it in my brain to people who move to Hollywood and have similar experiences at parties where they turn and realize this movie star is a foot or two away from them. 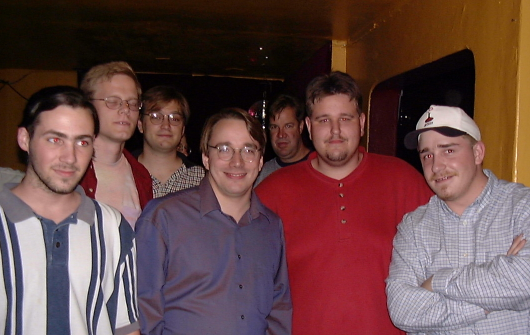 (Thanks to Randy Loux for the photo.)

I thought it was really neat, anyway. Hollywood for geeks!

Anyway, as we were leaving, so too was Linus, to a cheering crowd as he entered a white limousine. Celebrity chiq, neh? Well, it blocked my way out for a minute or two and I bade a last parting glance at this attractive woman who after eyeing each other on the dance floor told me about one of VA’s new wonderful rack-mount servers. I think she said it was 2U with five bays, which I have to admit, impressed me. Well, if I get a call from her I’ll have to admit that Linux boxen were not the first thing on my mind when she caught my eye. I’m hoping the sales pitch was more a reflex action after a few days of conference, to some chatty party dude.

Not like any sane person goes to a geek party expecting to meet women.

Things are just weird out here.

As I was checking out the conference, a few different things went in to my head. The first was that it was interesting to see all these companies gathered with the intention of making money off a Freeware OS. Corel’s demonstration of their pre-beta distribution was the most poignant, for me. They had four graphical dialogs and after a point-click-click Linux was installed on a computer in four minutes, requiring no thought as to partitioning.

It booted in to a somewhat polished KDE desktop. It struck me as a rather hard sell aimed at users like my mom. I could give mom that Corel Linux CD and she could have Linux up and running as easily as any other program.

Of course, its a whole OS, so you have to boot it separately, but hey.

Another thing that struck me was that all those years spent as a geek child were somehow paying off. I was entering a conference of people with interests very similar to mine, along with living in a part of the world where computers is the thing – everywhere you look. It felt like I’d graduated some weird alien test and was entering the temple of the promised land.

But I don’t actually like computers that much. I wasn’t going nuts or anything, I just thought it was all kind of cool.

Revenge of the Nerds.

But what struck me as most interesting, in my mind, was how Linus must feel, strolling between the booths. A fun little project to write a useful OS back when he was a grad student has blossomed in to something huge, with growing momentum behind it. It must boggle his mind. He seems to keep it all in stride too, at least from what I can tell from an interview I recently read. I think without his attitude, Linus would have become a world-class dork by now. You know, like Bill.

One interesting thing about the attendees, was that most folks were young. Sure, there were the occasional scruffy-lookin’, old-school, Unix types, (Erm, you like that? I stole it from Sven’s site.) But most of the people there were twenty-somethings. Some were business types, and many were just geeks. there was definitely some undercurrent of revolutionary fervor. I proudly wore my FreeBSD tee-shirt, to show what flavor of geek I was. The FreeBSD people I ran in to tended to be older, and more scruffy-flavored.

Kickin’ it oldschool BSD at the Linux con.

Does this make sense to anyone? Only a select few, I’m guessing.

Today we had an earthquake. It was a magnitude 5 and at this time there’s two reported aftershocks.

Of course, I’m far away from the epicenter so all I felt was my chair wobble a bit as I shook my leg. Angus remarked that we’d just been through an earthquake and Jim and Patrick seemed to think he was putting them on.

Many of us at Tellme are very recent transplants to the area.

Today is mom’s birthday. While I missed Grandma’s and Uncle John’s birthday, because I can’t remember so many things so well, I think it appropriate to be able to remember my mom’s birthday.

So I gave her a call, but hopefully she was out partying. Good.

Today I picked up a patch kit for my bicycle, which has a flat tire. I didn’t, however, get to the DMV. I’ve got two things to do there – register my car because it’s expired, and get me a California license. As a third I’m thinking to try and score me a motorcycle permit. Possibility of fun there, see?

You see, the other day I was driving along and I wanted to switch lanes so I turn on my signal and wait for the guy at my rear to pass.

Now, I’ve run into this thing where CA drivers will slow down and let you pass ahead of them if they see you have a turn signal going, but this was just moronic, so I cut over in front of him and went a lane extra to the left turn I’d been wanting, all the while thinking ill of the fucknut who stopped in the middle of the street because I had my turn signal going.

Then I noticed he was a cop.

And as I turned his lights came up.

So I got pulled over and did everything right and well, turns out it’s really illegal for me to drive right now:

But he just gave me a “fix it” ticket for the license plate stickers. Okay. Well, I’ll fix everything else this week too.

Anyone got suggestions for a young guy in California driving a beater vis-a-vis auto insurance?

So, I guess the reason he stopped is he figured I noticed him behind me and so was slowing down to change lanes behind him but wait-a-minute, are those expired tags? Is that why he’s aiming to slow and pass behind me and make this turn?

And then nailing me for insurance … I guess that and the license are something that might be hard to prove in court if I put up a fight. You’re supposed to get a license within ten days of moving here, but does the state really want to go through the trouble of calling around and proving your residency just so they can fine you?

And same with the insurance, but I gotta get that fixed, for sure. If I plow in to somebody’s beemer I’d bet the insurance company would be more than happy to prove my fraudulence.

Makes sense in retrospect. I guess the moral is you never know when a fucknut is going to be a cop.

Saturday I just chilled out. Relaxed around the house and made a run to Clarke’s as I’ve had a habit of doing on Saturday’s lately – GOOD, if expensive, burgers. I caught a movie called “Kiss the Girls” on HBO and had a nice quiet night to myself.

Sunday we went up to Lorah and Joe’s in Frisco for some home-made ice cream Lorah had made. Fun Illinois Alumni sausage party, conversation drifting from electrocution, to dreams, to IMAP implementations, to flying and on and on, it was cozy and Lorah had strategically served enough sweets to leave us all feeling happily sluggish.

And when I got home at midnight, I immediately got a call from Tammie …. could she get a big favor …. did I have jumper cables for her new motorcycle?

Yeah sure. What’s a big favor in her book I explained was a learning experience in mine. After puzzling the contraption over, finding the battery, and consulting with Doyle over the cell phone, we judged that she might very well have a 6 volt system which we’d rather not fry with my 12 volt charger.

So we took Joe’s advice and got it a push start. Now, this was kind of fun. “Oh, you mean I have to have the ignition on?” “Wait, am I supposed to let off the clutch?”

Tammie normally drives stick, but I guess it’s a new experience if you’ve actually been driving reliable cars. When I get Lucy running again maybe I can give informal lessons to those of my friends who are uninitiated in the black art of starting a car without using the starter motor.

But yes, for the record, after a few tries, the bike was purring like a happy, noisy kitten.