Dispatch from the Dawn of the Twenty-First Century

I just finished watching a movie, so I decide to flip channels and check on the War. The satellite television is tuned to BBC America, and is in the middle of a live audio report from a British reporter who is reporting from the front lines as Marines take in Iraqi Prisoners of War.

The War in question is being broadcast live around the world. It is being waged so far with an eye towards avoiding not only allied casualties, but civilian casualties. At the same time cities around the world are dealing with protesters, who oppose the war because they see it as the precedent of imperialism on the part of the contemporary empire.

The empire regards itself as a fairly benevolent, often isolationist Republic that is being forced into acting in this war on the grounds that since it is the world’s great empire, it is threatened by barbarians who pose a magnified threat because in our time, there are weapons of such fantastic destruction and cruelty that would be used without warning.

I think a good reason to have children, is so that if I live long enough to meet them, my grandchildren ought to blow me away on a consistent basis.

Even though he wanted more time for inspections, Blix said yesterday that he didn’t know if he could ever be sure that Iraq wasn’t hiding the illegal missiles.

So, Adam clued me into a website called PhotoSIG, which allows you to upload photos to be critiqued. You can only upload so often, which is actually kind of cool, so I started with my picture of the couples kissing goodbye at a Berlin train station.

The web site itself is a pretty darned reasonable time-waster, and time is something I have a surplus of these days.

I’ll post more photos directly into the log sometime soon. I went over to San Francisco yesterday to interview at a newly-opened Cafe-Restaurant-Cocktail lounge across from the newly-opened Asian Art Museum. The interview was weird, as if they had blown me off before I even sat down. Oh well, I got to admire and talk to some good-looking women while I was waiting. Then I went down to the demonstrations to watch the cops run around the place in riot gear. Got some pictures of them arresting people at a sit-in. Some excitement for a Friday evening.

I Really Hope I’m Wrong, But …

Dave Bort has recently put some effort into making some very funny cartoons. I’m not Dave Bort. This means I get plenty of sleep, but I haven’t put enough serious effort into developing my ideas. Still, that doesn’t mean I can’t idly mess around once in a while. I thought I’d borrow from Tom Tomorrow: 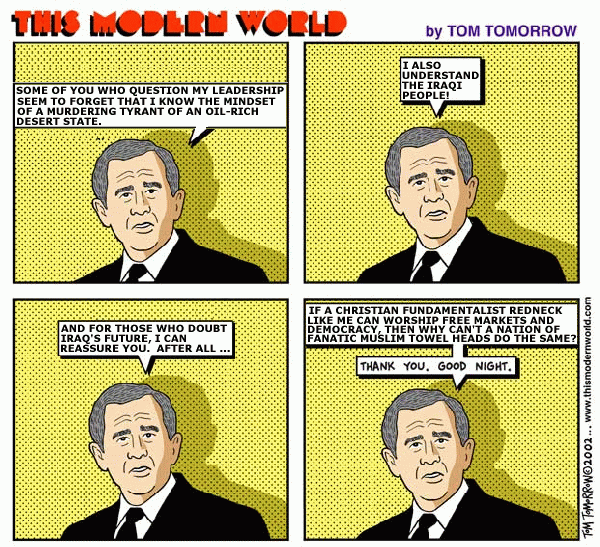 It was actually good practice with the GIMP such that by the later frames I was making effective use of moving layers around and whatnot.

I walked down the hill a little earlier today. Washington Mutual doesn’t do currency exchange, but Bank of America does. I had two Â¥10,000 and a Â¥1,000 to exchange. Bank of America charges a 1% transaction fee to those who don’t hold an account. My answer was that I’d rather pay the 1% than be broke. The guy went to get the exchange rate book, and a big color catalog of what different currency notes look like. I had figured that at 120Â¥ to the dollar, the Â¥20,000 ought to earn me $160, with another $8 for the Â¥1,000.

He counted out more cash than I’ve seen in a good long while now, and I remarked that I was going to fill my tank.

The 1% charge was waived. I attribute this to a combination of his mis-placed decimal point, and to the impression I got that he was sweet on me. He suggested I open a checking account, now with no fees. I responded that I just might do that in the future when I had some money to put into such a thing. As it was, I was immensely pleased that the exchange cost me less than $5.

Flush with cash, and tomorrow my day of reckoning before the administrative law judge, who may determine once and for all my eligibility for unemployment benefits, which could see me with $2,000 pretty quickly, and a lot less worried about problems.

But what I have other ideas I want to play with now. No more War news for a while, just me, Michael’s stereo, a comfortable office chair, and an Internet terminal. Maybe I can get some ideas worked out.

It is nice to have money in one’s pocket.

I was shocked when I first met a pro-war Iraqi in Baghdad – a taxi driver taking me back to my hotel late at night. I explained that I was American and said, as we shields always did, “Bush bad, war bad, Iraq good”. He looked at me with an expression of incredulity.

Meanwhile, Back in Jordan …

The official and private views of some ranking Jordanian officials appear to be diametrically opposed. Officially, they condemn the war and say they are “deeply troubled” about the repercussions of the war on the region, and describe the situation as “critical.”

Privately, and not for attribution, they say the United States is developing a new opportunity for the Middle East. Said one former prime minister, “If the U.S. can get a new Iraq to recognize Israel as a quid pro quo for a final Palestinian settlement, others will fall into place — Syria, Saudi Arabia, and the other Gulf states. Iran would then have to pull back its military support for Hezbollah.”

So, today I had my hearing before the administrative law judge regarding my unemployment eligibility. He makes his decision by the 28th, and I should receive the letter within a week.

It doesn’t sound too good. The letter of the law is that eligibility is contingent upon involuntary separation from your very last employer. Off the record, it was suggested that my error was in filing for unemployment immediately upon returning to the area, after previously quitting from the Pizza Place, which I had argued was only temporary employment. Had I taken a one-day temp job, I’d again be eligible. Weird laws.

Sometimes you eat the bear, and sometimes the bear eats you.

In the afternoon I had a reasonably positive interview with a swanky restaurant / bar / night-club in the Metreon. Five positions, one hundred applicants, I figure I can make it to a pool between 15 and thirty for round two, which is supposed to happen in the next few days, at which point I’ll definitely be employed, or not. I reckon my odds are roughly 20% of landing the job. This is actually pretty heartening under the circumstances.

What I appreciated about the day was that both of my judges were left-handed. I called my afternoon interviewer on this, figuring it doesn’t hurt to identify a point of solidarity on our shared minority status. After all, what good is a waiter in a swanky place who can’t schmooze?

If I don’t have a sufficient source of income in the next week or two, I’ll likely be making the decision to leave the area, probably returning to Illinois, where I’d be close to family and have a lower cost-of-living threshold to worry about. It’ll probably take a week to secure some gas money, and plan a little shindig.

For those who feel they’re not making enough decisions lately, you can judge my rhinoceros.

In unrelated news, I bought a bunch of vegetables today. I felt like some hippie freak, approaching the cashier with a variety of veggies, pita, hummus, and of course, some beer. Time to snack.

I’m too lazy to tune elsewhere, and BBC America doesn’t bother with war coverage anymore, instead showing reality shows where women are filmed with hidden cameras so they can be told how horribly they dress, and then given £2,000 to buy a new warddrobe with the advice of experts. So, I watch CNN a little bit every day, to see what war looks like.

It looks like whiz-bang computer graphics giving you a vague idea of where in Iraq the fighting is, and the vague capabilities of our high-tech weapons. “Well, it flies n miles per hour and is guided by satellites and it can be launched from a ship!”

It looks like grainy, jerky, crappy “live via Videophone” webcam images of guys driving around, getting into firefights.

It does not look like people getting blown up, maimed, wounded, killed, losing their loved ones. It does not show casualties. It does show Iraqi POWs sitting in the desert waiting to be trucked off somewhere, and of course eschews showing all but two seconds of Iraqi footage of American POWs.

The live dialogue always tries to bring up how fantastic their own news coverage is, thanks to technology, and their guys in the field, giving you unprecedented war coverage! Go CNN! And thanks to the philosophy of reality TV they can sink to the most disgusting lows – cheap emotional spectacle.

Last night, and it sounds like they love doing this, they got a soldier on the videophone, and then put his wife online, so we could watch them interact, awkwardly, in public, live: the courtship habits of the American military family. He was a bit shy, making sure to say “I love you,” and she was trying hard not to feel too upset at his being away. The worst of it was when he showed off his missing tooth, trying to reassure her that while he’d been hit with a concussive explosion, the worst he sufferd was a lost tooth. She was clearly distressed at the news he had volunteered that he had suffered a concussion; Sure it was just a tooth, but this just reinforces the knowledge that he’s in a situation where losing body parts is a very real possibility, and he’s being so cocky about it!

It is great, I think, that these two get a chance to talk to each other, but it is cheap, crass, disgusting exploitation that CNN is going to let a family use the videophone for the purpose of airing people’s private lives.

The decision to go to war, the decision to join the military, and the decision to marry a soldier are all very real, serious, difficult decisions that people make with great caution. The decision to be a journalist, and provide real, useful information to people, is far easier, in comparison. You don’t do that by exploiting people’s personal lives for spectacle. Michael Moore thinks Bush should be ashemed, but far more obvious to me is that CNN should be ashamed.

Shame on you CNN! I didn’t want to see you exploiting that family! Stick to the computer graphics of weapons if you are too inept to show us the real war.