Dannyman's been toasting himself in the sun 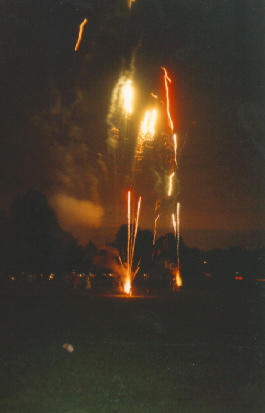 Well, Independence Day certainly rocked. After much dickering and dithering I finally had a BBQ at my house in Chicago, mostly family, but Ed and Rachel dropped by, enjoying themselves much, as I could tell. There's more families in the neighborhood now, more young fathers with impressionable kids who like fireworks. After the neighbors exhausted their stockpile on the blacktop, we wandered over to Rogers Park and there were several groups visible shooting fireworks off. Some guy, referred to as "the Indian" was shooting off some weird, evidently homemade stuff. A few things shot up in the air and exploded like an M80, setting off car alarms in the neighborhood, whose wailings added to the noisy festivities. Well, until a patrol car happened into the park and told everyone to go home. I took pictures of the works, hope they came out.

On Saturday, after a nice meal in Chinatown with some folks, we went to see "Men in Black" which was a right entertaining movie. I enjoyed it. Brian really dug it. He's the gentle-sir who drove me to and from Chicago, and to the movie.

I've not been writing much in the ol' journal eh? Well, it gets to br a drag to spend so much time working with computer for pay and then to continue doing stuff just as I always do. Errr, like I mean the weather's nice, and all the labs close early. I much prefer hanging out somewhere at 1AM writing up here you know?

So I been thinkin' of heading out for Colorado between 10 August when the lease expires, and the two weeks later when I'm s'posed to start school. Just stash my stuff somewhere you know? It'd be nice to meet dad, possibly head out to California to enjoy once again the San Diego beach.

The bike is in the shop. Some drunk motherfucker must have felt like ... well, whatever he felt like, I found the bike splayed off the rack at a funny angle. The front wheel was misaligned, so I eventually bought a wrench to fix that, and noticed that the frame was bent up. In the rear it's out of spline, and the part that goes out to hold the rear wheel is mashed into that rear wheel. Bogus! The guy told me any other place would have sold me a new bike, but that he could make it rideable again, and relished the challenge. So, in two weeks I should have my cool old Raleigh back and rideable again. I'll be a really happy camper then!

Ahhh, girls? Eh, try not to worry about them so much, just enjoyin' the scenery you know? I'll let what happens happen. Asao is starting to talk to me a little bit now. That's good.

I've started to amass a respectable mp3 collection. There is some Smashing Pumpkins in it. I've found that, given my first date was a Smashing Pumpkins concert with Linda Ho, that the music tends to make me miss her of all folks. I think it's a side-effect of actually hearing a few words from her mixed with the fallout of breaking with Asao. Wonders never cease?

Right now I'm hungry. Mom sent me home with some brats leftover from the party. I've finished eating them though. Last night I marinated a pair in beer. They turned out good. I didn't like the beer so much, but the brats seemed improved by having soaked in it. Anyways, it's a darker honey brew beer or something, and goes down better if you don't let it wallow on your tongue-tip.

I may be hooking up with Mary soonish for a movie and/or dinner.

I'm enjoying work. The bloody audit is kinda finished, and we're working on getting all that data into our DNS database, after which we'll start tracking unaudited miscreants and getting their data, until the whole inquisition is complete, and we can begin to reap IPs. Funfun!

Well, time to finish this entry up. I'm sorry it's not very titillating. I'll hopefully get some better stuff soon. You know, interesting thoughts like. I've been keeping those pretty much to myself, however unfortunately for the ol' web page.